The powdery veins of white pigment float within the deep gray field of our concrete bathroom floor, wisps of cloud in a dark sky. My husband Neil and I put so much intention into making that floor just right. We first conjured a shared vision—a floor with depth, transparency, durability, even poetry. I was tasked with figuring out how to execute the vision while Neil provided feedback, our usual creative way, the back-and-forth surprisingly smooth and productive. It was a challenge trying to predict how we should plan for the forming and colouring of our dream concrete floor, and we didn’t find immediate success.

Underneath that visible concrete surface is another layer, now covered and almost forgotten, our first attempt using ordinary concrete tinted with a reddish powder dye found at a local building supply store. Those first results were disastrous, rough to the touch in places and with a harsh red tone, the antithesis of the smooth warmth we envisioned. But Neil and I are both determined problem solvers, so we asked acquaintances, gathered more ideas, and sourced a self-leveling mixture with the perfect grey tone. We were finally satisfied, even more so because of the richness of our creative conversations: Neil and I sitting in the dining room, facing each other, a rapid back-and-forth of ideas and thoughts, neither of us ultimately remembering who came up with the solution. All this mutual visioning, sincere intention, and hard work layered so much meaning onto this sheet of liquid rock.

Our home began its service to us as a fixer upper, bought almost twenty years ago, when renovating a single bathroom down to the wood studs was more noteworthy. I wanted to patch up the cracking bathroom tile and make do, but Neil insisted on a fuller project, so we gutted the room and made everything new—the hidden (wiring, plumbing, insulation) and the visible (drywall, tile, fixtures). Partly because the space was so tiny and awkwardly shaped, our design discussions focused on textures: the concrete floor, but also the pitted glass mosaic tile the colour of luminous beach glass, the fine wood grain of the cedar bathtub skirt, even a toothbrush holder fashioned from bundled sections of copper pipe which we anticipated would develop a patina with age. In hindsight, all of these carefully chosen textures provided a kind of mortal counterpoint to the shiny white acrylic bathtub and hard chrome fixtures that are a standard defense against the daily onslaught of moisture and human grime. We were justifiably proud of our work. But soon the bathroom was just another lived-in room, the tile grout stained with mildew no matter how hard we scrubbed, a faint web of scratches in the bathtub, and toothpaste residue that seemed to re-form immediately after being wiped clean.

Our home had six rooms for the two of us, and years after that bathroom renovation, two became three. Our son Simon came to us when he was only three weeks old. He was briefly our foster child before he became legally adoptable, the whole process happening with uncharacteristic speed. We had initially expected to adopt older kids with special needs, the mainstay of public adoption. Friends and acquaintances remarked on how very Canadian it was that a multi-racial gay couple lucked into adopting a healthy newborn boy with such incredible ease, and Neil and I both felt very lucky indeed.

With a baby, our bathroom took on a new role, a place for bath time and diaper washing up, the cedar medicine cabinet now stuffed with baby paraphernalia. Our tiny bathroom was the perfect fit for our quirky family, a meeting point physically midway between his bedroom and ours. A witness to the late-night cries, at first always for “Appy” as I was the primary caregiver, later partly shifting to “Daddy” as we worked to rebalance our parenting. After the groggy zombie walk to check on him, the squeak of the hinges as we opened the cedar cabinet for the thermometer or medication, we hustled him back to bed, always hoping for a better sleep.

One of those late-night cries led to Simon, already nine years old, bent over the toilet. In the limbo between night and morning, I sat on that floor beside him and Neil perched on the edge of the tub as Simon rode out this rare bout of nausea. While we were talking, Neil suddenly looked through me, saying with a complete absence of emotion, “I don’t feel very well.” He slumped forward and rolled onto that hard, grey floor, his face somehow landing gracefully on the cedar stool stored below the sink, while crushing the glasses that framed his big blue eyes. My body responded before my brain, hoisting him into my arms and onto my lap. My legs went numb, pressed into the concrete under our weight, as if Neil was actively pushing down with his compact and muscular body. But he was neutral, absent, unconscious.

I called out his name, my mind leaping to the worst scenario. He’s going to die. I’m going to be alone. What should I do? How will I survive? Panic rose quickly to my throat but I tried my best to remain calm because Simon was still there, having moved now to my side, still quietly observant. I was cradling Neil’s body (and it was truly just a body in that moment) while also emotionally cradling Simon, softly calling to him, reassuring him, keeping his eye, monitoring him as I always do but with greater intensity. It was the worst sort of moment, but also a moment of rich emotional experience—fierce love; paralyzing fear; intense family bonds; being pulled in two directions and having to decide which one, which person. These two primary connections in my life, the two taut lines that connect me to my husband and to my son, were suddenly out of balance, threatening to topple me.

I snapped out of my stupor, Simon still at my side. I might have gently slapped Neil’s face or caressed his greying hair. It’s impossible to say how long he was unconscious but I was relieved when he finally opened his eyes, though they remained veiled. Neil was coherent but groggy. He remembered that while sitting on the edge of the tub, his energy had suddenly drained. We helped him shift his body to sit upright, his back against the tub, his outstretched legs spanning most of the floor’s length. He took a few minutes to collect himself, insisting he was fine. We considered calling for an ambulance but instead called our local health advisory phone line. The whole time we were bathed in the soft intimate glow of our incandescent nightlight.

The intensity diffused outwards from that moment. We roused our lovely neighbour and friend, Stephen, to take Neil to the hospital while I stayed home with Simon. That feeling of being pulled in two directions again. Neil and Stephen left, and Simon and I went back to sleep, exhaustion finally overtaking me.

The doctors ruled out a heart attack, but Neil’s irregular ECG results suggested other troubling possibilities. Neil returned home in the morning, walked nonchalantly through our front door, and reported the inconclusive nature of the tests as though reporting the weather. He was his usual combination of gently cheery and stoic. He spent the following weeks and months visiting specialists and taking tests, each crossing one possibility off the list, until finally we received confirmation that the only things wrong with him were a harmless heartbeat irregularity and a propensity for fainting. Neil was going to be okay. It was like the world had ruptured and slowly healed over, like a crowd that spontaneously parts around a spectacle, then closes in when only its energy lingers.

Things went back to normal, but everything had changed. A lifelong introvert, I suddenly found myself seeking stronger connections with the people around me. With work colleagues as well as the friends that I quietly treasured, I began to chip away at the barriers that had prevented me from expressing my profound appreciation for their friendship and love. The stark realization that the remaining decades could now be counted easily on one hand brought a clarity and warmth to everyday tasks, especially those performed together as a family. Fresh motivation also bubbled up to fuel big projects, our longstanding plan to design and build a house up north moving from “someday” to “soon.”

Last summer, after years of putting it off, I finally replaced the stained grout around our bathtub. It was laborious and messy, hours of guiding the vibrating head of the compact grinding tool between the tiny tiles while clouds of white dust swirled around me, coating my sweaty skin. My arms swept back and forth in wide arcs as I pressed and smoothed the new grout into place with a dense rubber trowel. It took less time than I had feared, and I was fully invigorated by the focused physical work. The new grout dried stark and white, a bright grid framing each tile, flecks of it filling the tiny pits in the green glass. Our well-worn bathroom is suffused now with a fresh energy, as good as new, or perhaps even better. Now, after each shower, I stand on that concrete floor, bare toes warmed by the radiant heat, vigorously wiping down the tiles and grout. Each pass of the dry cloth brings a rush of appreciation and remembrance. I look up and out through the window. A sliver of sky is visible between the neighbouring houses. 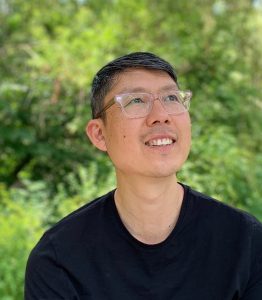 Peter KS Yu is a queer Korean-Canadian writer and teacher. He came to writing late in life, having first trained as an architect and then as an elementary teacher. Common themes of his writing include identity, childhood, culture, family, and nature. He lives in Toronto with his husband and son.