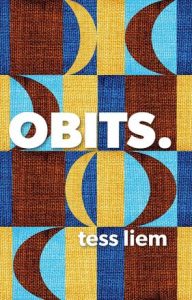 Winner of the Gerald Lampert Memorial Award in 2019

Obit: the announcement of a death.

“It sinks like a stone, this attention to the lives of others.”

Obits. opens with the above epigraph from American poet Wendy Xu. The poems that follow are haunted by these words but also by the sentiment; we pay attention to the lives of others, but only in certain contexts, only certain lives, and only at certain times. To me, the sinking stone symbolizes those that may never get an obituary, because of how they lived their life or how they experienced their death. If Tess Liem’s collection teaches us one thing, it is that certain deaths carry more social capital than others.

Obits. is equal parts introspection and external meditation. Grief is such a personal experience, but in order to grieve we need external evidence—stories that are passed down, stories we tell ourselves, and stories that we refuse to tell. Liem’s poignant poetry details the “timid animal” (39) of grief that follows the death of a distant aunt. This collection asks us to consider many questions, but perhaps the most important is: “how do you unearth what was never buried?” (48). This asks us to question how we grieve something that doesn’t feel like it’s gone—how do we find ways to leave our bodies behind and how do we leave the bodies of those we love?

Obit: a grief that can’t be buried.

Liem’s collection is divided into four sections which are diverse in their poetic approach and connected by the death of the speaker’s aunt. Each section engages in an act of rewriting, whether that is rewriting the poem, rewriting the obituary, rewriting the self, rewriting the family, or rewriting the body. These sections are intricately structured to guide the reader towards an end point: one last obit that might finally be the right one.

The first section, “Theories,” opens with a poem entitled “Dead Theories,” in which numbered sections detail different kinds of deaths: the speaker tries to dye her hair blonde, lists fictional dead blondes in popular culture, hears that there are forty-nine dead in Orlando, and admits the numbness of inhabiting a body. These numbered sections chip away at the façade of a “glamorous death,” specifically the ways that dead blondes are portrayed and mourned in media. With references to Hitchcock and popular TV shows, Liem explores the possible falsehoods of grief through avatars like Laura Palmer of Twin Peaks, Dora Lange of True Detective, Alison DiLaurentis of Pretty Little Liars, and Lilly Kane of Veronica Mars. Liem contrasts these popular fictional names with the staggering numbers of missing and murdered* women whose names are not publicized and whose deaths do not count beyond their statistical worth. By this writerly sleight of hand, readers find themselves in a strange in-between where fictional deaths are more tangible than actual ones, leaving us to face the fact that much of what we know about death and how we give it meaning and importance is imposed by the entertainment industry.

In the next poem, “When,” the capitalistic nature of grief and mourning are shown through anaphora which persuades readers like a plea. Liem writes:

With the repetition of the word “when” and the cyclical nature of melancholy, Liem carries us through the poem and plants us back where we started. If you have ever experienced grief of any kind, this is exactly what it feels like—you return to the same place again and again but always slightly changed.

Obit: two fractions that are intertwined.

In the second section, “Ibu, saudara, isteri” (translating to Mother, wife, sister), Liem deftly introduces a fragmented body that is not only divided by grief, but is also divided by impressions of “passing” and the exactitude of negotiations that follow in daily life. In “Exact Fraction 1/2,” the speaker writes about “she,” a woman whose racial identity is questioned based on the fractions of her identity and whose privilege and worth are extrapolated from that sum. Liem writes:

She is an exact fraction. An excellent
fraction. Each half exactly half. Exactly.
She numerates, she denominates,
she divides, she
fractures
exactly (51)

This fracturing of the body or of perceptions of the body continues in the next poem, “2/2,” where the speaker insists that she is not a fraction; she is actually two voices with different sounds, tones, and frequencies that can speak in unison. This duality of voice comes into play in more concrete terms in the next section, “Rewrites,” where a number of similarly titled poems appear in different iterations. For example, Ibu, saudara, isteri translates to Mother, wife, sister, a direct translation of the same thing, but slightly changed. This series of poems begins with the line “I have been rewriting stories” (66), which is effectively the conceit of Obits.—stories are written, translated, and rewritten so that they are fractured and put back together to create something new.

The title of the book comes from the structural flourish of eleven different poems entitled “Obit.” and each tackles obituaries and memory from a different angle. There are poems titled “Obit.” in each of the four sections as a common thread in the collection. The repetition of the title and the constantly changing content complicates any perceptions we may have had about obits as stationary or unchanging. Liem shows that the obit continues to change after death; we can keep trying to write the obituary, but it may never settle into a fixed form.

Obit: fractures we inflict upon ourselves.

The final section, “Yesterday,” in future tense, questions who has the right to be stoic in the face of grief and how stoicism is a privilege. Liem uses classic Greek stoics to exemplify impassivity in the face of grief as well as toxic positivity. The image of the sinking stone returns in “The stoics” but this time it is as an embodiment of the speaker; she is the pebble that is “supposed to take pleasure in not being totally weathered” (87). This poem shows that it does not matter whether the glass is half full or half empty. Sometimes, it is good enough to have gotten out of bed and made it as far as the porch. Sometimes, the glass is just empty.

Through Liem’s poetry, we are reminded that there is more than one way to grieve, just like there is “more than one way to leave a body” (82). Liem’s poems are graceful and captivating and she is not afraid to show the dirt, stains, and bugs that are left behind when a body dies. Instead of hiding behind clichés of grief, Liem finds a way to unearth what was never buried to give some of those without an obituary a place to call home.

*For readers outside of Canada, the term “missing and murdered” is a reference to Missing and Murdered Indigenous Women and Girls (or MMIWG), the human rights crisis that is currently ongoing in Canada and the U.S. 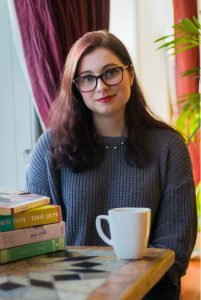 Amy LeBlanc is an MA student in English Literature and Creative Writing at the University of Calgary and nonfiction editor at filling Station. She is the author of two chapbooks, most recently Ladybird, Ladybird, published with Anstruther Press (August 2018). Amy’s debut poetry collection, I know something you don’t know, was recently published with Gordon Hill Press. Her short story collection, Homebodies will be published with Pedlar Press in 2021. Her novella, “Unlocking,” will be published by the University of Calgary Press in their Brave and Brilliant Series in 2022. Her work has appeared or is forthcoming in Room, PRISM international, and the Literary Review of Canada, among others.