I announce that I don’t want kids. My mom’s reply: “You’ll change your mind

when you’re older. Life is meaningless—”

She actually says this! I shit you not! Meaningless!

“—without children.” Years later, I tell her that remark

still bothers me. She says, “I never said that.”

On the fourth rainy day of our vacation, my dad is bored

enough to ask for a book from my stack. I loan him a novel,

He reads it. Likes it. Beneath my pleased surprise

some ineffable lifelong fury festers. I decide to test him

further. “Would you ever read a novel by a woman author?”

“Probably not,” he says. I wait a few seconds, then

prompt him: “Not even mine?”

On the phone one morning, my brother tells me about

an upcoming fishing trip. “Men only. No girls.”

He’s so serious, I have to laugh. He says

their girlfriends have been driving them nuts lately,

they need to get away from the “bitching.” But then,

“I’ve never dated one,” I tell her. We’ve been hanging out

about men. The inevitable

to say them. Most of the glasses are hers. She’s a feminist

when she’s sober, but now her eyes are fondling me

with the trademark unsubtlety of the shitfaced. Her pretty little brown slip-ons

sidle up to my clunky blue velvet boots in the dark below.

She’s my friend. Supposed to be. She begs me

to kiss her, to come back to her apartment.

I withdraw my feet, hide

them underneath my chair. I say, “Don’t you have a boyfriend?”

(A futile question: she’s been texting him all night.)

Wide-eyed, she shakes her head

yes. She says, “He wouldn’t see it as cheating.” She says,

“He’d love it if I brought you home.” 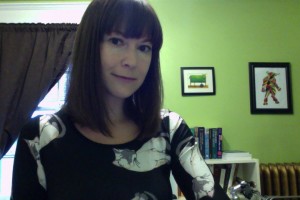 Meaghan Rondeau is an escaped academic who eventually found her way to the UBC MFA program and is living the spinster dream with six overflowing bookshelves, a cupboard full of baked goods, and her sister’s cats. She mostly writes poetry, short fiction that’s inappropriate for most contexts, nonfiction, and translations of Greek and Latin poems. Her first short play, Cassandra in the House, will be produced at the Brave New Play Rites festival in March. Past things of hers have appeared in The Moose and Pussy and Room, and she was shortlisted for Room‘s poetry contest in 2013.