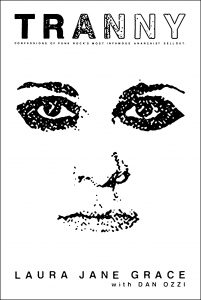 During an interview with Trevor Noah on The Daily Show, Laura Jane Grace addressed the title of her recent memoir, Tranny: Confessions of Punk Rock’s Most Infamous Anarchist Sellout, released in 2016. Her response to Noah was similar to her response on The Late Show with Seth Meyers and to her explanation on Twitter: she called her book Tranny because the word had power, and she had anticipated the wound the word would make ever since her 2012 transition. To her surprise, though, the first person who called her a tranny was another trans person. They’d removed the dangerous association of the word by using it in a friendly manner. And because the first time Grace was hit with that particular slur wasn’t in a moment of violence like she’d feared, she’d been healed by it instead.

Marginalized communities have been reclaiming words for decades, so what Grace is proposing to do with her title isn’t new—but I do think there’s a magical quality to it. I say “magic” because of my own connection to the word. The first time I heard it used against me was when my then girlfriend claimed that hanging around her led me to my trans identity. “I got you with my tranny wand,” she joked. “Now enjoy your magical transformation.”

Since so much accurate information about trans identity is obscured by media stereotypes, meeting a trans person can prove to be a personal revelation of identity at the same time as it’s a dismantling of false expectations. Because of that, it really does feel like magic as an entire world of options opens up. My then girlfriend and her group of friends had met one another and transformed together, and she brought that magic with her when she met me—the “tranny wand” in action.

Grace’s Tranny is evidence of that particular kind of queer magic. From a neo-pagan perspective, all spells are words arranged in a particular order with a direct intent, and through that intent, the person’s wants and desires manifest. It’s clear from her title and interviews that Grace wants to imbue the slur with new meaning and turn it into a healing token. My only qualm is that I don’t think Grace’s spell-casting is strong enough.

The book has a co-author, but it’s not the same kind of co-author relationship that Ivan Coyote had with Rae Spoon when they wrote their musical tour and gender memoir Gender Failure. This is a co-author who is staying in the shadows, helping the original author along. When I see a co-author like this in trans memoirs—such as Chaz Bono’s Transition: The Story of How I Became a Man—I’m on guard. Since information about trans people is hidden, I worry that the person assisting the memoirist may make changes to the trans person’s experiences so that their expression falls in line with an accepted image of trans people. In other words, I worry that the co-author will shape the prose of Grace’s life, similar to how Harry Benjamin shaped the lives of the trans people he worked with. The doctor’s image of trans people, and the co-author’s, can become eerily similar.

That is not to say Grace’s memoir is boring or transphobic. No, not really. Grace deals with self-hatred and uses outdated language at times (like the heavily medicalized term “transsexual”), but again, most of that 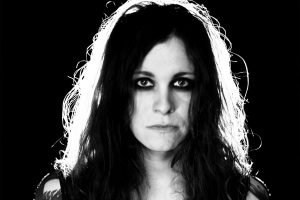 comes from an internalized place of transmisogyny which she discards by the end of the memoir. During Grace’s tour for the book, she’s been consistently well spoken about political and social issues affecting trans people and cognizant of the trans community and other trans writers. But the structure of her memoir itself leaves me wanting more because it seems so standard.

The memoir opens with Grace’s first moment of difference—realizing that she wants to be Madonna—then moves into her struggle as she seeks to come out. Most of the book is about that inner turmoil, the bread and butter of most trans memoirs. Grace also writes about her band and her characteristic excesses alongside periods of sobriety, another standard in the realm of trans autobiography and behind-the-music specials. It’s not until the last quarter of the book when she comes out and deals with the gendered expectations of those around her that the book starts to become interesting to me. Because that was the point when it became interesting, it left me wanting so much more by the time the memoir was over. The standard arc of the trans memoir was complete, however, now that she had transitioned socially and medically, so the story had to end.

The thing is: that’s usually when the story is over for cis people. For trans people, it’s just beginning.

If Grace came out with another book, I’d read it in a heartbeat because I’d hope she’d pick up the story from the last page of this one. Until then, I’m left feeling like her reclamation of the slur isn’t enough to heal; it’s merely a band-a solution. She’s anticipating violence, not disavowing the violence. So there is still a lot more work to be done.

Tranny is a good book for punk rock historians, especially those concerned with gender, and it’s a good primer on the basics of transgender narratives (as told to doctors/cis people), but I’m hoping for a little more magic in my life.

Evelyn Deshane has appeared in Bitch Magazine, The Rusty Toque, and Briarpatch Magazine. Their poetry chapbook, Mythology, was released in 2015 with The Steel Chisel. Evelyn (pron. Eve-a-lyn) received an MA from Trent University and currently studying for PhD at Waterloo University. Visit them at: evedeshane.wordpress.com