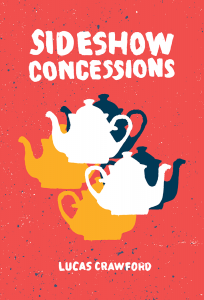 In Sideshow Concessions, Lucas Crawford writes fearless, shameless poetry, born, no doubt, from a lifetime of fear and shame. This is the rare alchemy of Crawford’s writing—no binary is safe (or distinct) from its perceived opposite, no genre or gender unbendable. Like the circus freaks of its namesake, Sideshow Concessions delights and disturbs in equal measures, navigating a complex spectrum of otherness—queerness in the broadest sense—whose speaker is at once the “fattest man in the world,” a “bearded lady,” and a “sword swallower.”

The book’s first section, titled “Fattest Man in the World,” opens with the poignantly unsubtle poem “Your Fat Daughter Remembers What You Said,” immediately dismantling the gender binary: the man in these poems is/was also someone’s daughter. This opening poem introduces and interweaves many of Crawford’s recurring themes, including the speaker’s complicated relationships with gender, weight, family, and sexuality. The effect is voyeuristic, thrilling, and discomforting. The first four lines inhabit us in a family drama already in progress:

My dad was in the hospital cafeteria
eating lasagna when I was born.
I was making lasagna at home when he flat-lined.
Symmetry.

As evidenced here, one of Crawford’s most striking achievements in Sideshow is his tone, which slips between casual calamity and honest indignation, underscored throughout by a dry, ribald sense of humour and a cautious self-determination. “Fat Daughter” proceeds to chronicle the speaker’s difficult relationship with his father, artfully splicing fragments of their conversations with the poet’s decidedly offhand, idiomatic commentary:

Months before he died,
my dad carried a small portable cabin
through the woods with a buddy and said,
If that doesn’t kill me, nothing will.
Irony is the new black, Dad,
and you know it’s slimming.

Like “Fat Daughter,” many (though not all) of Sideshow’s poems avoid heavy poetic flourishes, preferring more prosaic rhythms and cadences. This looser syntax, coupled with a poet’s affinity for stanza breaks and numbered sections, provides Crawford an expansive narrative territory. “Stop All the Clocks on Pancake Tuesday,” for example, originally published in PRISM international (sans line breaks) as a nonfiction piece, masterfully combines elements of memoir, anaphora, and stanza breaks to explore one of Sideshow’s many social taboos: a secret student/teacher affair. The opening line, “For Lent, I will give up sleeping with my professor,” offset in its own stanza, burns away any doubts about the speaker’s commitment to speaking his truth despite potential risks. By repeating “For Lent, I will…” again and again, Crawford pens a sort of obsessive meditation on letting go:

For Lent, I will ignore the students
she and her husband currently favour.
I will hand out lukewarm smiles like Halloween candy […]
I’ll swallow it one day like tight old gum,
but I know it’s I who has stuck in her gut
for eight years or more. 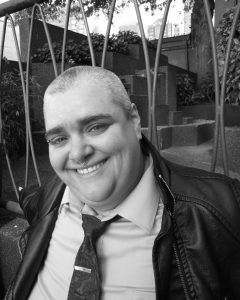 Sideshow’s second section, titled “Bearded Lady,” introduces subtle shifts of focus. A recurring ex-lover (or lovers) populates this section, adding a sense of maturity and lessons learned through trial and error. Many of these poems detail the speaker’s often comical, sometimes heartbreaking, forays into dating. In “Long Twisted Things,” he writes: “I had never let anyone watch me / Eat spaghetti, brush my hair, hear me urinate.” In “Introducing the Letter Ex (1),” he writes: “My girlfriend has a name: Gone. / I have a name: glad.” Here, Crawford’s tone has also matured, at times almost sentimental, at others, jaded or righteously dismissive. His speaker’s commitment to spitting truth, however, never wavers. In “Introducing the Letter Ex (2),” Crawford writes: “Before you left, / we looped a / string / around your clit, / tied it to my bits, / and stretched it / across the river. // Now I strum that / string slowly / each time I / remember.”

As compelling as these failed romantic snapshots are, my favourite poem of this section (and possibly the entire collection) is “Airplane Lavatory Algebra,” which, despite seeming a bit out of place in this section, serves to elevate Crawford’s discourse on weight and the body’s “bruising constraint.” I first read this poem in Subterrain’s online imprint Line Break, and was immediately captivated by its playful poetics and fearless self-examination:

If X = my ass
and my ass is 100 feet behind first class,
then let Y be the compression required
to have X in the airplane lavatory—
I am the reluctant engineer of the Mile Wide Club.

As the poem progresses, Crawford invents an ever more elaborate algebra of claustrophobia where “V = the volume of the airplane lavatory / and C = the circumference of my thighs.” As in “Stop All the Clocks on Pancake Tuesday,” Crawford repeats certain rhetorical devices to great effect, in this case, “If ___ = ___, then let ___ be ___.”   This lends the poem an almost Biblical parallelism, at once weighty (pun intended) and humorous.

Sideshow’s third and final section, titled “Sword Swallower,” seems largely preoccupied with place, whether the “dirt road’s cold shoulder,” where the speaker learns to parallel park (“Road Rules”) or his hometown, “where everyone knows / …[the] details of your first date, first kiss… / and they whisperhiss about your prescriptions” (“Hometown”). Many of these poems navigate the bittersweet nostalgia of homecoming after a long absence. This section opens with the funeral procession of the speaker’s father and drifts between schoolboy memories and scenes of domestic depression. The ex-lover(s) returns but seems far more removed and, by “Cruising Utopia,” has transformed into an apparition:

Ghosts are perfect lovers because
you don’t need to clean up afterwards.
Even your hands don’t get dirty
and I know you like that […]

Like its speaker, Sideshow Concessions defies easy characterization—slim enough to carry in your back pocket (I carried mine for weeks), yet with heft enough to warrant multiple readings. These poems are fat, juicy bites of life, rich with experience—not always tender, but never tough.

Sugar le Fae (aka Zach Matteson) is a prize-winning poet, a translator, teacher, photographer, songwriter, and Radical Faerie. His poems, essays, and interviews have appeared in numerous literary journals in Canada and the U.S., including Plenitude, Lemon Hound, and Eleven Eleven. Sugar received an MFA in creative writing from UBC.