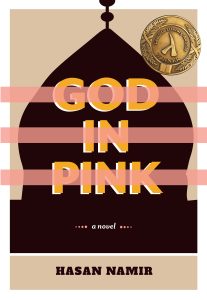 “I’ve read the Qu’ran, and I know the passages you’re referring to. None of them clearly condemns homosexuality.”

Does Islam really forbid homosexuality? Can you be gay and still be a practising Muslim?  To some, this may sound absurd, but these are some of the important questions posed in God in Pink, the debut novel by Iraqi Canadian writer Hasan Namir. Set in 2003 during the US-led invasion of Iraq, the novel follows Ramy, a twenty-year-old closeted gay student, and Ammar, a highly respected sheikh.

Ramy lives with his brother and sister-in law who are pressuring him to get married. Both his parents have died—his father killed under Saddam’s regime. Ramy deeply cares for both his brother and his sister-in-law, but he cannot tell them he is gay because he fears chastisement and the loss of his family. To add more pressure on Ramy, his brother Mohammed projects his own perceived failures on Ramy, pushing him to fulfill duties he could not.

When the story introduces Ammar, he holds firm beliefs that being gay is a sin in Islam. It’s not until he starts receiving visits from the Angel Gabriel that he’s forced to question his beliefs about homosexuality. Angel Gabriel, who is depicted as the Angel of Revelation in Islam, is highly significant in the Qu’ran because he gives important messages to many Islamic Prophets, including the prophet Mohammed (PBUH). When Gabriel begins visiting Ammar, the latter becomes confused, almost tortured, in having to unlearn values about homosexuality that he has never questioned. He starts to understand how our values impact how we read the Qu’ran from generation to generation—often reading meanings into the verses and passages without questioning them.

The most compelling aspect of God in Pink is the way it questions how we interpret the Qu’ran, specifically the story of Lot, and what it claims or doesn’t claim about homosexuality. Although these questions are not new—they’re often discussed in Islamic philosophy and academia—it’s refreshing to see them explored in literature. Western frameworks frequently assume that Middle Eastern and Islamic cultures hold rigid views on queerness, believing that anyone who is gay will be disowned from their family, face persecution, and be victimized and denied rights. Although there is some truth to this, it overlooks the critical thinking and dissenting opinions within LGBT communities in Muslim countries, which both Ramy and Ammar participate in despite the excessive barriers they face. Even though the story offers little hope for systemic change, none of the characters abandons Islam, as it is still a large part of their identities. 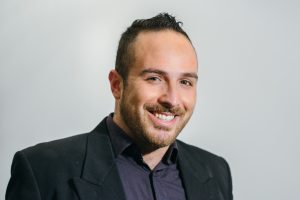 Two main wars occur in God in Pink: the internal war both Ramy and Ammar experience and the external war with the US occupation. The narrative focuses on the internal war, yet there are references to the chaos Iraq has reached under the US-led invasion. As a result of US imperialism, the country is littered with security checkpoints, the university faces attack, and the divide between Sunnis and Shias expands: “During Saddam’s reign, we had no checkpoints, but now there are too many of them. There are Sunni and Shia areas, a distinction we didn’t have before.” Furthermore, God in Pink suggests that life was easier for the LGBT community during Saddam’s time in power and became more difficult once the US invaded and brought in so-called freedom.

God in Pink is a short and approachable book despite its heavy subject matter. Many times while I was reading the book, I imagined it as a play because much of the story is told through dialogue, which seldom provides opportunities for the reader to access characters’ interiorities. The prose feels overly simplistic at times, but the narrative makes up for this with strong, complicated characters who experience personal journeys through fear, self-awareness, and truth.

I must admit when I was first asked to review God in Pink, I had reservations. The story sounded interesting, but as a cisgender, straight Muslim woman, born and raised in the Greater Toronto Area, I had to be aware of my own social location while I was reading. I am a proud Muslim who supports LGBT rights, but homophobia in the Muslim community is still something I can ignore if I choose to because it doesn’t impact me on a daily basis. God in Pink presents an outlet for marginalized voices and is ultimately a story about human rights and self-determination. Essentially, Hasan Namir’s novel interrogates whether we can be ourselves in a world bombarded with preconceived ideas of religion, politics, and morality.

Salma Saadi is a Canadian social worker and writer. She is passionate about refugee rights, food policy, and accessibility. She has completed a three-month writing residency at Artscape Gibraltor Point on the Toronto Islands and has spent three months writing in Berlin at the artist residency Takt Kunstprojektraum. She had her poem “Below Us” published in Untethered magazine. She is currently continuing to work on her first novel.