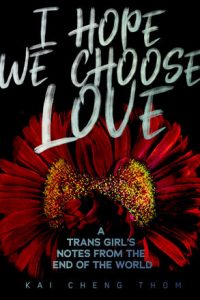 My dear trans kindred—weird sisters, brothers grim and gay, siblings-in arms: What kind of world do you want to live in?
–Kai Cheng Thom, “How Neoliberalism Is Stealing Trans Liberation”

Kai Cheng Thom may be best known for her personal essays and her advice column in Xtra, “Ask Kai: Advice for the Apocalypse,” though her contributions to feminist, queer, and trans literary culture also include the novel Fierce Femmes and Notorious Liars: A Dangerous Trans Girl’s Confabulous Memoir (Metonymy Press); the poetry collection, a place called No Homeland (Arsenal Pulp Press); and a children’s book, From the Stars in the Sky to the Fish in the Sea (Arsenal Pulp Press). Her expertise as a former therapist enriches her advice column and is also what makes her latest book with Vancouver-based Arsenal Pulp Press, I Hope We Choose Love: A Trans Girl’s Notes from the End of the World, an especially thought-provoking read.

I Hope We Choose Love weaves personal storytelling with poetry, criticism, folklore, and political theory. Skilled at stylistic hybridity, her voice throughout is both conversational and incantational. In “Righteous Callings: Being Good, Leftist Orthodoxy, and the Social Justice Crisis of Faith,” Thom uses the essay form to not only speak directly to her peers but also to chant for a more speculative revolutionary future: “If I can’t fuck up and learn from my mistakes, then it’s not my revolution. / If I can’t disagree with you, then it’s not my revolution … And if it’s not our revolution, then let’s build a new one.” Packing this opening essay with a mix of humour, cheek, and honest critique, Thom is both calling her community to work alongside her as well as contending with her own political disenchantment: “And my crisis of faith, I suppose, is the realization that maybe I’ve escaped an iron cage for a softer, ore sparkly one. With rhinestones.” Effective, vivid, and honest, this critique of new oppressive norms within queer and social justice spaces could not be a more accurate analysis of the messy communities Thom and I are both part of. Instead of walking away, Thom urges us—echoing bell hooks’ influential All About Love: New Visions—to choose love. While I would argue that anger and rage cannot be separated from love (after all, how can we love one another if we are not angry at our oppression?), her observations of how anger and rage can be misused and become “poisonous influences” in communities is spot on. Who ends up benefiting from the use of social justice dogma matters. Thom’s reckoning is that trans women of colour are the first to be left behind. In a devastating condemnation of passivity within queer communities, the essay, “Stop Letting Trans Girls Kill Themselves,” argues that inaction in the face of trans women’s suicides is “the ultimate expression of disposability culture.” Choosing love here is not an abstract concept, but rather a call to action that “cares about people over ideas, that prizes each and every one of us as essential and indispensable.”

Many of the essays in I Hope We Choose Love end with an invocation of hope for community, lifting readers out of the messiness of everyday conflict and minutiae and into a space where personal and collective freedom can be imagined and practiced. In turn, unheard emotions, language, and a desire for spiritual guidance emerge within her poems, which use repetition, dialogue, and folkloric imagery to transform the mundane and social into the mythical and fantastical. In “if you should start to think forbidden thoughts,” the speaker paves a pathway out of intercommunity trauma through such imagery, transporting us into the landscape of a fairy tale:

While offering readers her hand, Thom’s speaker is not the sole keeper of healing. Drawing strength from beyond her audience, she asks a goddess figure, her ancestors, and an alternative version of herself to protect and accompany her truth telling. Indeed, companionship with mythical protectors explains why the poem “dear goddess” works so well as a down-to-earth, informal prayer: “or at least, it feels long / and i think / we can put it behind us / right, goddess? / we were so young / and foolish then / and anyway, if you don’t mind / i need to ask you / for something.” Both loving and angry, both reverential and disappointed, both hopeful and mournful, the speaker gestures towards an imperfect intimacy between human and divine that is both universally accessible and rooted in her unique perspective.

Though Thom does not cite all her influences, I Hope We Choose Love is deeply intertextual. Indebted to Black and Latina trans foremothers, transformative justice practitioners, somatic therapeutic practices, and #MeToo activism, the book also draws analysis from novels like Gabriel García Márquez’s Chronicle of a Death Foretold and J.M. Barrie’s Peter Pan; books and articles about disposability, like Sarah Schulman’s Conflict is Not Abuse and Porpentine Charity Heartscape’s “Hot Allostatic Load”; online reception of Robin Williams’ suicide; wisdom gained from being a family therapist; and offline and online conflicts in community. This is not an exhaustive list, but so you get the gist, a varied, almost polyphonic, effect is the result. As I hungered for a lengthy list of sources, Thom reminds me that, beyond giving credence to Laverne Cox, Janet Mock, Marsha P. Johnson, Sylvia Rivera, and others who have chosen to be in the public eye, the act of not naming many trans women forerunners who came before her is an ethic of protection: “People who have chosen to remove themselves from public visibility might rather stay unseen. In a time when so much of the queer rights movement is obsessed with visibility and representation, it occurs to me that trans women have rarely had the right to privacy in the first place.” If trans women are cast as archetypal mothers, nurturers, and protectors of queer cultural narratives, and if they too often disappear because of burnout, public scrutiny, violence, and suicide, then writing about love and healing as a trans woman is itself an intertextual practice: “let the elders speak / as best as they can / through the impure vessel / of my body,” Thom beckons. Trans woman authorship conjures “up the voices of those who have come before” and “walks hand in hand with those in the next world.” In other words, intertextuality is not only a literary practice of naming and subverting the cultural texts in which author and readers are steeped, it is also a form of community accountability where ghosts, ancestors, and unheard voices can find home and speak to each other on the page without also being exploited. It is a way that such voices can be imperfect and flawed, to speak truth and have complex needs—not merely be confined to the roles of mother or nurturer or protector. Rooted in respect and honour, this intertextuality may also be read as a Chinese practice of ancestor veneration.

Adding to the vocal medley, Thom splices in folklore and oral storytelling—forms that are rarely seen as rigorous or legitimate. She writes to be accountable to the “line of ghosts” of trans women walking behind her. This is more important than legibility to cisgender audiences, even as she gracefully extends her hand to these audiences. By imagining “a mythical school for storytellers,” picturing marginalized people’s movement between visibility and obscurity as villages or woods filled with “fires that burn or…shadows that hide,” and wondering if “fellow second-, third-, and fourth-generation Chinese-Canadian queers are the hungry ghosts” of their communities, I Hope We Choose Love powerfully imagines each person in community, alive or dead, as spiritually connected to one another. This scaffolding makes her case for transformative justice even more convincing. It is also how Thom chooses to care about people over ideas in her writing, using her skills and insight as a former therapist to reimagine care within interpersonal relationships as a broader ethic of love. Within a queer cosmology visualized in her poem, “siblings,” people who hurt one another are like the Sun and the Moon. Despite the Moon stealing light from the Sun out of a desire to be seen, and despite not sharing the same space, neither is dispensable.

In “Complications of Consent,” Thom insists that queer folks should not have to say that they were raped or abused for their pain to be believed. Against the rapid circulation of #MeToo testimony published online, the legend-weaving slowness of Thom’s voice guides readers into a sense of timelessness which resists the disposability of stories of trauma and how we make meaning from them. Articles can be read and lost on Twitter feeds or Facebook timelines. A pandemic can erupt across the globe forcing everyone to suddenly rely on the effective but tenuous forums for storytelling on social media. But a book filled with monsters, ghosts, and other mythical creatures keeps possibilities of queer futures alive even amidst unfolding and increasingly violent catastrophes. 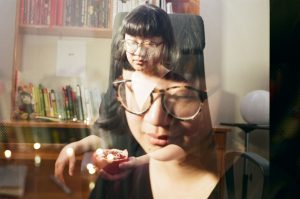 Jane Shi is a queer Chinese settler living on the unceded, traditional, and ancestral territories of the Musqueam, Squamish, and Tsleil-Waututh First Nations. Her writing has appeared in Canthius, PRISM international, Briarpatch Magazine, and The Malahat Review.