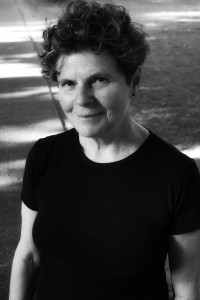 Lake of Two Mountains, Arleen Paré’s new poetry collection, is a rich meditation on place, memory, nostalgia, and loss. Paré interweaves vignettes of family history with kaleidoscopic bursts of lake imagery, biographies of local monks, maps, plants and animals, place names, and geologies. This collection is haunted by the inevitable ecological disasters of “fertilizers, tailings, / a factory upstream” (“Armies of Frogs”) as well as “Mohawks / who … claim their dead buried under the pines” (“Oka Crisis”).

In “How Fast a Life,” near the book’s opening, the speaker returns to the lake where her mother had “spent her summers,” in order to release her ashes “[i]n handfuls … catching the wind / landing on the lake’s surface.” This moment proves the foundational narrative anchor for the whole book, though the mother figure is achingly absent for much of the collection. When we do meet her, we’re often in dreamscapes or half-repressed memories, such as in “Figments,” in which the speaker’s mother has a “coffined face … [and her] dress is a dress she’d never have owned.” Or in “Whether Wind,” which opens in the self-reflexive second person: “the night you lost your parents it was / evening first summer maybe August / parts are missing”—parts including most specifics of the mother’s life and death—which is odd, considering the mother (who, along with her family, “once owned the white house up the road” [“Whose Lake?”]) seems integral to being here. The book’s allusive grip on the mother figure is at once befitting to the theme of loss and potentially frustrating to readers. The mother becomes the dangling carrot keeping (and leaving?) us hungry.

The father, on the other hand, is relatively well explored. In “Dad before Lake,” we learn about his working-class roots in “Mossend, west of Glasgow … where his father / slung sheets of hot steel,” and that “[h]e called the lake Shangri-La.” Two poems later, in “Dad in Lake,” we even get a physical description—I’m sounding a bit like an archeologist.

Other poems present the father as a tragicomic figure who “scoops and bails / scoops and bails” the water from the bottom of a leaky family rowboat (“To Oka”), and who “whistle[s], freed from the house / of the sisters-in-law” (“Walking the Island Road after Dinner”).

In lieu of describing the mother, Paré pens vivid portraits of her relatives, in particular an older aunt and an Uncle Bobby, presumably her mother’s brother, both of whom suggest intriguing aspects of the general family character.

Instead of the speaker’s mother, Paré focuses on the mother’s role models, from whom we are left to glean something of the mother’s character. Was this perhaps the fate of unmarried or widowed women in the family? What was it like to live with a brother who’d “left for the war … returning years later, / a box-camera snapshot in hand: / foot soldiers, himself and four friends” (“Uncle Bobby”)? Paré’s poems offer only indirect speculation. The effect is genuinely haunting and leaves the reader wanting.

I’m a great admirer of Paré’s poetics, her studious attention to punctuation, line breaks, and white space. Lake of Two Mountains seems to have two basic, overlapping stylistic modes: poems are either punctuated or not—and lines are either broken or not. By varying these techniques, Paré artfully manipulates the textures and atmospheres of her reader’s experience. In some poems, such as “How Mend the Years,” the unpunctuated, broken lines seem to overflow and bleed into one another, and yet the narrative is generally clear and consistent.

There is very little to criticize as concerns Paré’s poetics—her craft is evident, well earned, and polished. She keeps even eager poetry readers on our toes, varying the lengths of her lines and her poems, mindful of the effects of white space and punctuation. Paré may not be particularly interested in strictly traditional forms, excepting, of course, an obligatory nod to the glosa (“Last Day”), but there’s no carelessness here; these lines are evidence of thoughtful, hard work. 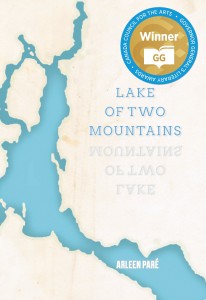 My main criticism concerns the overall cohesiveness of the book and what it leaves the reader, how it navigates its world. The first five poems trace the cyclical nature of an unnamed lake as it’s “pummelled” again and again by rain (“now stippling thin waterskin”) and wind (that “scud[s]” its “silver face”), before the inevitable “surfeit of calm / redoubles the lake.” These initial descriptions are scientific in their attention to setting, at times haiku-esque, at others geologic, naturalistic. The lake is explored without a speaker until the sixth poem, “Summer House Revisited,” in which the voice we finally arrive at speaks counterintuitively in the second-person “you.”

At first, the reader isn’t sure whom the speaker is addressing; however, the intimacy and self-reflexive tone—as well as the persistence of the second person throughout the book—eventually situate us squarely inside the speaker’s head.

Furthermore, as mentioned above, the death of the mother would seem to be the catalyst for the speaker’s return to the lake, and yet she’s scarcely mentioned again. Instead, by substituting imagined portraits of Trappist monks and disembodied flashes of lake imagery, Paré writes a kind of meditation on avoidance. For some readers, including presumably the judges of the Governor General’s Award, Paré’s shift away from the self is an asset to the collection, and I don’t disagree, but without a sufficient anchor in the speaker’s specifics, the less personal poems are simply less compelling. I felt myself wondering, “What did the mother think of these monks?” “What was the family’s relationship to the Mohawks?” And found the answers lacking. Finding instead Frère Gabriel’s imagined thoughts on God—gorgeous poetry, but ultimately avoiding the questions that Paré weaves into the work, perhaps most poignantly when she asks in “Eight Miles to the Centre”:

What difference if the lake changes—

or if you belong?

If you’re looking for some of the best lyric poetry Canada has to offer, grab a copy of Arleen Paré’s Lake of Two Mountains—the craft and breadth of the work alone are worth the price of admission, but don’t expect a soap opera.

Sugar le Fae (aka Zach Matteson) is a prize-winning poet, translator, teacher, photographer, songwriter, and Radical Faerie. His poems, essays, and interviews have appeared in numerous literary journals in Canada and the U.S., including Plenitude, Lemon Hound, and Eleven Eleven. Sugar has an MFA in Creative Writing from UBC and is currently pursuing a PhD at the Institute for Gender, Race, Sexuality, and Social Justice (UBC).