Tamai Kobayashi is the 2014 winner of the Writer’s Trust of Canada’s Dayne Ogilvie Prize for LGBT Emerging Writer. She is the author of the novel Prairie Ostrich, published this spring by Goose Lane Press and two short story collections, Quixotic Erotic (Arsenal Pulp Press) and Exile and the Heart (Three O’Clock Press). Her prose has been described as vivid, electric, and with a sharp eye for the poetic in the every day. In addition to writing fiction, she is a screenwriter whose work has screened the Montreal World Film Festival, Toronto International Film Festival and Sundance. Born in Japan and raised in Canada, Tamai Kobayashi is currently living in Toronto. 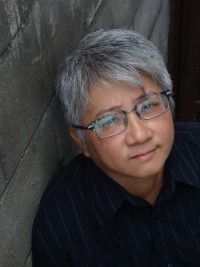 Prairie Ostrich, told through the eyes of eight-year old Egg Murakami, is described by the 2014 Dayne Ogilvie jury as a compassionate and funny novel for anyone who has spent time on the outside looking in. Can you tell us a little bit about the genesis of Prairie Ostrich?

I was living in Calgary at the time (I moved from Toronto in 1994). I found a vibrant community of writers of colour, a small but supportive community. We would take day trips out to the Dinosaur Provincial Park, to the Badlands–now that was a landscape. From flat prairies to a gouge of coulee!

I took a course at the University of Calgary, the creative writing course and came up with Egg, her diary entries. Egg, who was reading Anne Frank. Egg, who didn’t know the ending to the story. And that is how Prairie Ostrich began.

Your narrator is 8 years old. This seems to me a particular challenge–to maintain an authentic voice, which you’ve ably pulled off. How did you go about developing Egg’s voice and character. And why did you choose to tell this story through Egg’s eyes, rather than, say, her sister Kathy’s perspective who is 17?

I initially did write a version from Kathy’s point of view but Egg always took over the story. It is strange how that happens.

Egg makes some very simple but sharp observations, for instance: “Everyone is different but only white people are normal. Even the television says that.” It’s a really strong statement and yet it’s just one of Egg’s many charming, sometimes funny sometimes heartbreaking, observations. Can you talk about your approach to dealing with hot issues in Prairie Ostrich and why you chose to help your readers find compassion even for a terrible bully like Martin.

Egg struggles with how the world is presented, always in black or white. All the stories she reads are good/evil, either/or and she realizes, very slowly, that the world is a more complicated place. I like to place her on that cusp of understanding. Sometimes the struggle can highlight that complexity. And Martin, after all, is a child. I think Egg has enough compassion to go around. 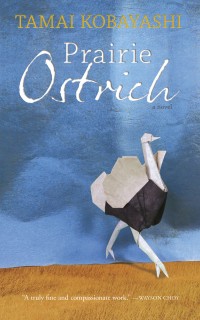 Prairie Ostrich makes reference to several books for younger readers including A Wrinkle in Time, The Diary of Anne Frank, Charlotte’s Web. Are these books you loved as a young reader too?

I loved The Diary of Anne Frank but it opened up that pit of darkness. A Wrinkle in Time had one of my first female heroes. But I discovered Charlotte’s Web much later, as an adult. I have revisited some of my old reads and I am surprised at some (my memory totally erased all the religious B.S. from Where the Red Fern Grows, and Roald Dahl–he was mean!)

Your previous books have been short story collections. Can you talk about the transition from writing short stories to a novel? Was it arduous or was it a natural transition?

The transition from short stories to novel form was not an easy one. I find short stories to have a natural, organic process. I struggled with the novel. In one incarnation of Prairie Ostrich, I wrote the entire history of the town, wrote the back story of the parents–novels let you ramble but that can also lead you astray.

Yes! And when the novel leads you astray, it does so for hundreds of pages. How long did you work on the novel?

I worked on Prairie Ostrich for a long, long time. I changed points of view from Kathy to Egg to limited omniscient Kathy and Egg, then third person omniscient (even Jonathan Heap had a go–he was a surprisingly sympathetic voice), with backstories from Mama and Papa (which made the novel completely unwieldy–and the focus, the narrative drive was lost). But Egg stuck through it. She dug her heels in.

Cutting the parts that I liked was hard. Cut to the bone, for the sake of the story. Then the characters will take you to the end.

And, to build on the question regarding the transition from short stories to novels, you work in other genres including screenwriting and science fiction. Are you a writer who works on many projects at once or one project at a time?

I try to keep a few ideas in the air. The theory is if I hit the wall with one project, I can shift to another. I also try my hand at drawing.

What are you working on now?

I am still working on a speculative fiction piece and a young adult short story collection.

The Dayne Ogilvie Prize, sponsored by Robin Pacific, is given annually to a Canadian LGBT emerging writer who demonstrates great promise through a body of work. You can find out more about the Dayne Ogilvie Prize at http://www.writerstrust.com/awards/dayne-ogilvie-grant.aspx

Nancy Jo Cullen is a poet and fiction writer living in Toronto. She was the 2010 winner of the Dayne Ogilvie Prize.