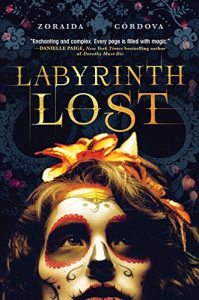 Labyrinth Lost by Zoraida Córdova is a fantasy-fiction story about Alejandra Mortiz, a bruja who comes from generations of witches. Alejandra, however, hates magic and wants to be a normal teenager. In an attempt to remove her powers during a ceremonial Deathday celebration, she accidentally sends her entire family to a dark land known as Los Lagos. In order to bring her family back, Alejandra must traverse Los Lagos with a shady brujo boy named Nova and learn the true potential of her powers.

Some of the best facets of the story are the magic system and the world-building. Inspired by aspects of Latin American culture, it is refreshing and fascinating, especially given how narratives of whiteness tend to dominate fantasy fiction. The magic system involves male and female witches known as brujos and brujas who cast spells known as cantos. These are unique to each person—my favourite cantos involved healing and summoning the elements. In this story, using magic comes at a price, known as a “recoil”: for example, bruises and physical scenarios that create a scenario of compromise and negotiation. Recoil presents a twist to the story, adding an interesting and rarely seen element.

The best world-building takes place in the land of Los Lagos. Each part of the land has its own unique characteristics—for example, a rainforest called the Selva of Ashes that can set itself on fire. There are also half-dead creatures known as maloscuros and female carrion birds called avianas. The creatures I enjoyed the most are adas, fairies who aren’t what they appear to be. I like how they are Latinx and how they managed to delay Alejandra and her companions with their magic and cunning.

Although most of the book takes place in Los Lagos, some of the magic happens in the real world too, most notably once Alejandra’s powers awaken. These scenes will entertain Harry Potter fans, especially those that are reminiscent of the early books from the series. A personal favourite is when Alejandra accidentally makes a snake crawl out of a bully’s mouth.

Besides the magic system and world-building, the characters are spectacular. Alejandra, the main heroine, is a reluctant witch; she is sympathetic and her growth as a character is inspiring to watch. The bisexual representation provided by her character is remarkable, because it shows her attraction to boys and girls without her having to come out. This is empowering to see due to limited positive bi representation within the fantasy genre.

Opposite Alejandra is the main antagonist known as The Devourer, another bruja. The Devourer has a fascinating character background that is woven into the history of the land of Los Lagos. She also comes across as very powerful especially when she battles Alejandra. The only complaint I have is that her power-hungry villainy can be as dull. I wish the book shared more of her backstory and brought more humanity to her character so we could better understand what motivates her.

There are other profound female characters, including Alejandra’s older sister Lula, her aunt Rosaria, and her great-grandmother Mama Juanita. These characters help Alejandra become more comfortable with her powers through their magical, spiritual, and familial bonds. One particular scene that stands out is when she learns to heal with the help of Lula’s spirit. It’s a really tender moment that demonstrates how much they mean to each other despite being apart from each other.

In addition to the female characters, Nova is a strong male character. At first, he seems like the stereotypical mysterious bad boy, but his street-savvy knowledge of magic makes him more interesting. As one of the major characters, he is the only non-family member, and one of the only male characters that helps Alejandra on her journey. I like that he gradually learns to respect Alejandra’s growing magical knowledge and ability.

All in all, Labyrinth Lost is an exciting and compelling fantasy adventure. This book shows that even if you’re feeling lost, you have the power to go where you’re meant to be. With great magic, characters, and world-building, the book is a fantastic journey.