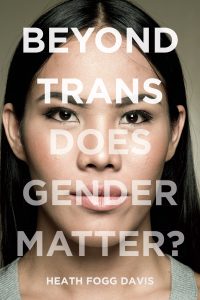 About halfway through my PhD comprehensive exams, I hit a wall. My reading list was composed of transgender literary works, meaning that I was reading autobiography after autobiography. As I took notes on these books, I began to wonder how long it would take until people in the academy started to see these individual stories as part of a larger community with real issues. Basically, I wish I had Beyond Trans: Does Gender Matter? by Heath Fogg Davis while studying two years ago.

Davis’s book is the quintessential transgender issue primer: he tackles the mainstream challenges catching everyone’s attention during the transgender tipping point, like the bathroom problem or biological testing in the Olympics. Since his book goes beyond transgender identity itself by focusing on the nuances of social contexts, it is, in many ways, an anti-memoir. Even though Heath discusses his own transition at thirty-eight and his experiences in certain problem areas (like those ever-present bathrooms), his story is not sentimental. It is not a memoir about the transgender self and surgery, and how Heath triumphs over cisgender adversity—because to represent the transgender story in that manner would be to assign bravery to those narratives, instead of actually critiquing why a transgender person must be brave in the first place.

Instead, Heath’s personal narrative acts as the catalyst for critique. Transgender people shouldn’t be judged based on their perceived bravery or strength—or even their gender permanence—because to view gender in that manner is to make others who do not change their gender markers on IDs, or obtain some milestone of transition, into failures and cowards. The answer to the title’s question of “does gender matter?” is an obvious yes, of course, gender matters—but we’ve been thinking it matters, and judging how it matters, in precisely the wrong ways.

The majority of academic books about transgender people tend to treat them as the object of study, an aber 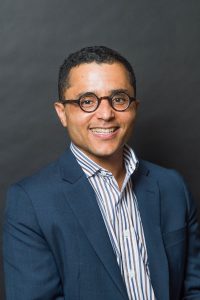 ration or a curiosity to learn from. Though Davis’s book is highly academic and his bibliography impressive (he cited things even I haven’t heard of after years of being in this field), his approach differs from prior academics. That’s not just because Heath is trans himself; his difference as an academic author comes from the exact way he answers that question of “does gender matter?” and how he constructs his arguments.

His approach is phenomenological—in other words, it is object oriented, but transgender people are not the objects. Like Sara Ahmed in her academic work, Davis examines how certain items (like IDs) and scenarios (bathrooms, yet again) become the origin points of people’s behaviour. When someone sees a gender-segregated bathroom, how exactly does that make them behave? What about adding gender markers to bus passes? Having women-only colleges and female-only sports teams? By pointing out gender, does it make life more equal? And moreover, by including transgender people in these systems, does it make all of us more inclusive overall?

His answer is no. In fact, gender segregation seems to trigger sexist behaviour, which affects both cis and trans people, because it points out difference and that difference implies a hierarchy. Moreover, the majority of the efforts to change gender segregation methods to include trans people end up excluding them further—such as creating third gender categories (like X on some licenses or a neutral bathroom on a fourth floor that isn’t even accessible). By trying to police gender more and more through segregation and special policies, we end up with a mess of inconsistent and often exclusionary practices that don’t make anyone happy and seem to actually make things a lot worse.

In each chapter, Davis presents a current issue in the transgender debate—such as bathrooms or sports or ID cards—and he goes through the common arguments for and against having this item. He discusses the myth of the transgender predator at length in the bathroom chapter, demolishing it wonderfully, as he does for the claims of protecting the city/country from fraud with the gender markers on other IDs. All these arguments were familiar to me because I’ve read the majority of material he’s cited from, and the clear way he lays it all out is quite impressive. The only chapter I was not as familiar with was the one on sports, but I still enjoyed it and thought, for the most part, that his argument tracked well. Beyond the book’s four well-written and extremely clear chapters, there’s an appendix including an example of a “gender audit” that he did for one of his schools in order to remove the segregation language that crops up in policy. For a policy nerd like myself, this was one of my favourite parts.

Heath Fogg Davis’s book is academically focused—but I don’t want to brush it off as something that only affects people studying this area or school administrators (though they should read this too). His discussion of bathrooms is so important because bathrooms affect everyone. If we can’t leave the house for longer than our bladder lets us, then we can’t participate in the world. Many of my trans friends call their bladder their “dog leash” because it consistently tugs them back from the world like a dog who has wandered too far off course. That choke of a dog leash was what I felt two years ago when I was reading nothing but autobiographies that seemed to ignore the bigger issues. To be “beyond trans” in our public discourse is to be beyond that dog leash—because everyone, not only the brave ones, deserves to go outside and participate.