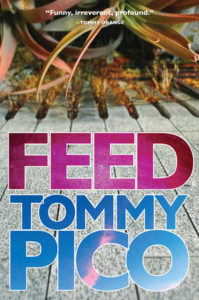 “Me and Leo yakkity yak yak’d / about writer’s / block / and the starchy long stroke of quote unquote God on the Meadow Walk and he didn’t know I was fully head over banana peels I mean in Kiehl’s I mean straight up in crappy love with him yet and maybe I didn’t either? Sand crabs poking their bodies & legs post wave Hindsight” (1). So starts Tommy Pico’s Feed, with what seems like the present but is a look at a past, a Hindsight that showcases Pico’s signature puns, sexual innuendos, dad jokes, and questions about spirituality, love, and belonging.

Pico, an Indigenous American poet from the Viejas Indian reservation of the Kumeyaay nation, is the author of Feed. Feed is preceded by three other book-length poems, IRL, Nature Poem, and Junk, all part of what has been called the “Teebs Cycle,” featuring the same speaker and persona or alter ego, Teebs. While readers often conflate the speaker and the writer in poetry, Pico makes it clear right away in IRL, the first book in the cycle, that his speaker is not him, but a dramatized and fictionalized version, the him he uses for performance, his drag persona. However, as the cycle progresses, the speaker moves effectively from pure persona, with a wide berth of fictional space between Teebs and Pico; the speaker and the author clearly separate, blending into one person in Feed. The difference between character and author are no longer clear, playing into the trope of poetry in an ingenious way. The question of truth becomes central to the inquiry of Feed, the lack of persona mirroring Pico’s quest to understand the complexities of our world, of performance, of persona, and of the self.

This merging doesn’t happen instantly; the differences between Teebs and Pico happen gradually throughout each book after IRL. This effectively makes Feed the most earnest of Pico’s books, which doesn’t mean it isn’t also filled with Pico’s signature puns, sexual innuendos, and dad jokes, while coupled with Greek mythology, and the more “serious” statistics about the anti-indigeneity and racism of America. These subjects are not new to Pico’s work, but in Feed, the bombardment of information becomes excessive, emulating the news cycle, quite literally a social media “feed,” and the intricacies of life: what does it mean to live as a marginalized person who also experiences privileges? How does one live these multiple truths? When Teebs recounts a moment where a reader told him he should wait five years between publishing books, he tells them: “and I’m like did u not just read? My cousin died today / and he was only two years older / than me / and it’s been this way my whole / life like biiiiiiiiiiiiiiiiiiiinch / I would LOVE to imagine / being alive in five / years but I have these bones u know? / and just like that I’m writing / a poem / a poem / a poem / again” (14). While we might suppose, similarly to the “anonymous reader” that Pico/Teeb’s world is easy given his success, the speaker reminds us of the deep fear of dying based on the truth of anti-Indigenous racism in North America, and globally. Pico’s whole life might seem to be a contradiction, a blending of different selves, but the juxtaposition Pico creates between his success and his fear of the ongoing violence of colonialism allows queer Indigenous writers to become more than just single faceted, expanding “the truth” to include these contradictions. It sounds like a simple concept, but the brilliance of Pico’s work lies in this kind of juxtaposition and in never stating a fact as one-hundred-percent true without then debunking it minutes later, essentially illustrating the world as one filled with complexity that defies easy recounting or a singular truth. Through humour, he alleviates the writing before bringing on the hard facts, allowing the reader to both breathe between the easier moments and the harder moments, while also allowing the world of the poem to mirror the world of today. Isn’t this how most marginalized people feel while scanning Instagram stories, sliding our fingers between a silly meme about writing, and another meme about the violence faced by our people?

“Dear reader, let’s make a culture! / Let’s make dough. Like anyone whose culture has been scrubbed from history, you can scrub my apple crumble […]”. To make matters more silly, he adds later, “I mean really, how can you be anything but a nihilist when you’ve accidentally clicked on a link to a anal prolapse vid Really?” While some might wonder how the hell a prize-winning poet can include iykwim in a poem (and we definitely know what he means) or make a joke about anal prolapse while also talking about the realities of death in Indigenous communities, it’s become a lazy critique to fault contemporary work for using the language of contemporary speech; Teebs ultimately moves further in than that, with Pico’s persona presenting not just the contradictions of the world in his work, but the contradiction of language, and the way it adds to the world’s miscommunication, a giant conversation with all your friends and enemies, one where no one can get a word in edgewise. It would also be remiss to say that the vulnerability is spilling out or that his book-length poems are just one long joke. Discipline amidst the chaos of language and world events, the thread of the book is so all over the place and yet so artfully crafted. The ingenuity of the book is making it seem more simple than it really is.

Feed’s use of juxtaposition and the chaos of the language also brings to the forefront the idea that multiple truths can live simultaneously alongside each other, that if you look into most of our brains, especially those of us who are neurotic and/or scroll our news feeds constantly, you’ll see that there are a thousand thoughts racing through our brains and that the best way to depict life is to show the truth of this disorder. And just when you think you’ve figured this book out, even when Teebs is telling you what’s up, telling you he’s deflecting, his honesty is still a deflection. He pretends he’s better than the sickly sweet lovers you see on TV, but not in a judgmental way; he’s just not like that, while being exactly like that, lamenting about Leo, his ex, and their past relationship, crooning about his favourite music, primarily the work of genius Black women musicians, and indulging in food, recipes, and nostalgia. With his focus on food, Pico adds another layer to the title. In an interview in New York Books, Joseph Osmundson—Pico’s friend and one of his co-hosts on Food4Thot (a queer podcast about sex, identity, culture, & reading), mentions that “[t]o write this book, [Pico] spent a year traveling the country and asking friends to cook, with [him], their favorite dish.” Feed becomes about more than just the newsfeed, but about culture, sharing, and the joy and beauty of eating and cooking together. So does this mean this book is actually about culture?

More than any of his other work, Nature Poem, Pico’s second book-length poem, often feels like it has the most direct thread between it and Feed. So many of the questions brought up in Nature Poem, like, how to be an NDN when you no longer have a relationship to nature, when you love the city, when your family is dying, when you aren’t feeding into liberal fodder about what an Indigenous person must be, are once again addressed in Feed. In Nature Poem, he asks why he wasn’t able to have levity as a teen, says, “Some other ppl know all the rules / of dating – Def do NOT send him that txt, Jess says / I wish more of my young self was free to learn abt flirting / and the Whitney Museum and the Shirelles / instead of which halls not to walk down for fear of getting my faggot ass beat or what to do when yr cousin high on crystal points a gun at you” (46). In Feed, he is echoing Nature Poem, saying “I have these bones u know?” (14). And once again, Pico isn’t offering any answers. Teebs keeps asking himself and the reader these same questions while also talking about the very real violence of colonialism that Indigenous people face daily, because these questions and issues persist. How to offer an answer to an unanswerable question? For Pico, this looks like asking the same questions when not enough is being done to respect and honour the sovereignty of Indigenous peoples, when not enough care is being shown by settlers, when feeble attempts at reparations aren’t enough.

While Feed is the most vulnerable of Pico’s books, it’s a controlled vulnerability. Once again, we are questioning what is true and what isn’t through the juxtaposition of Pico’s persona, and the “real” Tommy Pico. Teebs blends more fully into Pico in the pages of Feed, the line between them less strictly drawn. If you’ve listened to Food4Thot, you’ve heard a lot about Dr. John (and if you haven’t listened, you should), and know he’s been Tommy Pico’s therapist for years. Bringing Dr. John into the poem reiterates the speaker’s closeness to the real Pico, incorporating pieces of his real life. In this poem, Dr. John functions both as his therapist and also as Pico’s inner voice, asking: “why do you ass-u-me Teebs is the false self? Why do you ass-u-me / The shy thing The polite thing The hide behind a parent’s leg thing / The inside voice thing The scooped shoulders thing / The oh stop I’m worthless I’m sorry for breathing thing / is your lol truth? What if letting out the Teebs is reconnecting to the monkey bar swing singer before shame shame knew your name?” This moment solidifies the connection between Teebs and Pico, between the outspoken outgoing persona who could not give two shits, to the Pico most of us readers don’t know, the one Wilkes and Leo, fictionalized characters based on his real-life ex and his best friend Lauren Wilkinson, might know, the one Pico sees as his true and interior truth. This juxtaposition between Teebs and Pico is broken down, busted, revealing the contradiction within Pico himself, and the moment we realize persona might not always be so far from the truth. We’re all born naked and the rest is drag might not hold up in light of RuPaul’s transphobia (and thank god for that), but isn’t this idea sort of at the centre of Feed? Is drag or persona not actually the parts of us we layered onto ourselves to survive the world? And with this layering, do we not create new parts of ourselves, parts we might not always be able to shed once we’ve worn the outfits for too long? Is drag not steeped in the contradiction of being, not in a gender essentialist way, but rather in the blurry line between persona and reality, between truth and deception? If reality is at the centre of Pico’s work, the onslaught of news reminding us what’s going on, Pico’s idea of truth is one constantly questioned, scrutinized, ignored, or forgotten, and it’s one of layers and layers of what might build towards truth. 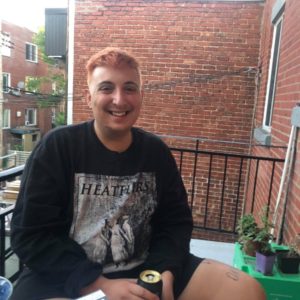 Eli Tareq El Bechelany-Lynch is a queer Arab poet living in Tio’tia:ke, unceded Kanien’kehá:ka territory (Montreal). Their work has appeared in The Best Canadian Poetry 2018 anthology, GUTS, the Shade Journal, Arc Poetry Magazine, Room Magazine, and elsewhere. They were longlisted for the CBC Poetry Prize in 2019. knot body, a collection of creative nonfiction and poetry, was published September 2020, and The Good Arabs, a poetry collection, will be published in Fall 2021, both with Metonymy Press. You can find them on Instagram @theonlyelitareq.