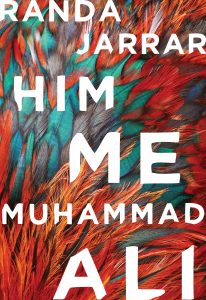 In Him, Me, Muhammad Ali, her new collection of short stories, Randa Jarrar tackles themes of longing, infidelity, betrayal, and desire, themes the Palestinian-American novelist, translator, and essayist introduced in her first novel, A Map of Home.

The stories in this collection contain both allegory and realism in varying doses, and Jarrar does not seem concerned that the forms of her stories sometimes mislead the expectations of her readers. The first story, “The Lunatics’ Eclipse,” is a magical-realist fable about a young girl who wants to catch the moon. The ending is surreal and allegorical in the best sense, but the story that immediately follows it, “Building Girls,” is completely rooted in a kind of old-fashioned realism whose ending is almost disappointing because one expects something magical to appear.

Despite this lack of a cohesive form, there are many gems to be found, and a couple of stories truly stand out for revealing something new, both about the diasporic immigrant experience and how it intersects with sexuality and desire. Jarrar is at her best when describing the intimacies between Arab women, in particular the ways in which both familial and sexual bonds are forever at risk of being subsumed by the larger patriarchal mores and dictates of society. “Grace” and “Asmahan” stand out in this .

There are points in some of these stories where the fiction veers too close to commenting on the politics behind the stories. “How Can I Be of Use to You?,” about a young assistant to a famous Arab feminist intellectual, revels in the ways in which extremely brilliant people can be extremely ignorant of their own flaws, and beautifully communicates some of the tensions and tortures of gaining intimacy with a famous person who is easy to love from afar. Yet, the story ends with an explicit reference to the viral video of Nawaal el-Saadawi, the famous Egyptian feminist who has been called a “grandmother of the revolution.” The narrative has already let us know that this fictional famous writer is an invocation of el-Saadawi, so the need to explicitly link the fictional author with her real-life doppelganger feels unnecessary.

The title story is about the daughter of an African-American man and an Egyptian woman in which the daughter is trying to honour the ashes of her dead father, but ends up grieving more for her mom than her dad on the trip back home. Although this is the titular story of the collection, the story itself seems like a jumbled-together mish-mash of different anecdotes and throwaway scenes. The title refers to a photograph (that may or may not exist) of the speaker’s father, herself, and Muhammad Ali. We are told near the end of the story that the Muhammad Ali being referred to is not the famous boxer, but the narrator’s mom, yet the narrative spends a considerable amount of time repeating or speculating on the story of how her parents met in Kinshasa while reporting on the infamous Foreman-Ali fight. The story itself is pretty far-fetched, and the interjection of Black America into this story is 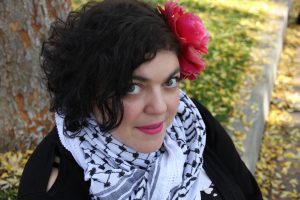 Jarrar has a tendency to lean on humour and comedy to brush off moments of discomfort or pain. Sometimes this works effectively and sometimes it doesn’t. In the title story, for instance, the narrator’s mom is dying from breast cancer, and the narrator briefly describes a poignant and painful memory of her mother sitting by the narrator’s bathtub and crying. The scene is not explored but glossed over, and left me wishing Jarrar had spent more time on it.

For those who are familiar with the voice of Nidali, the narrator of A Map of Home, the narrative voice rarely veers here from Nidali’s: in some ways it feels like it is always the young protagonist of Jarrar’s first novel who is telling these stories. Depending on your opinion of Jarrar’s first book, this is either a positive or a negative detail.

Still, the stories in this collection are worth reading simply to hear Jarrar’s voice, which is hilarious, joyful, and at times singularly affecting. Jarrar writes astutely and confidently of the ways in which women, and Arab women in particular, must navigate turbulent social worlds while revealing the textured interiority of their lives.