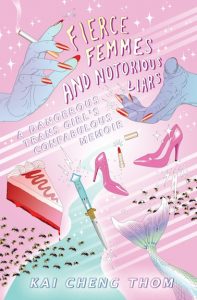 Published by Metonymy Press in 2016, Kai Cheng Thom’s first book is titled Fierce Femmes and Notorious Liars: A Dangerous Trans Girl’s Confabulous Memoir. The title should be enough to signal to readers that what follows is a conflated narrative of personal exploration through a landscape of mythological archetypes and fairy tale wonder. If the title wasn’t enough, the decadent pink cover art of knives, cake slices, cigarettes, and mermaid tails firmly displays the book’s origin in the fantastical. I cannot think of a book quite like this one, but Fierce Femmes and Notorious Liars is drawn from an ancient tradition of storytelling. Commonly known as fairy tales or Märchen (wonder tales) in the Western world and zhiguai in the Chinese literary tradition, Kai Cheng’s work is a ground-breaking urban trans girl fairy tale.

Populated by mythical beings such as witches, mermaids, ghosts, and anthropomorphic characters, Fierce Femmes and Notorious Liars is not a memoir in the traditional sense. Folklore and fairy tales often function as exaggerated reflections of reality, allowing listeners to explore complex real-world issues through a fantastical world. This approach to confronting reality is common across cultures and narrative traditions, as it allows for different access points into subject matter which could be painful without the glaze of wonder over them. Kai Cheng’s fantastical lens also lets her observations strike deeper than a direct approach would allow.

In one notable scene in the book, Kai Cheng has her protagonist encounter Dr. Crocodile, a trans-friendly doctor who is willing to prescribe hormones to trans women. It rapidly becomes clear that Dr. Crocodile’s interest in trans women is sexual and predatory. He inspects the protagonist’s body before proscribing hormones, an invasive exam that leads up to an implied forced sexual exchange between the protagonist and Dr. Crocodile. The fairy-tale rendering of this interaction presents Dr. Crocodile as a literal crocodile, with the other patients in his office presented as various animals as well. As a trans woman reader, I take this scene to be a reflection of the medical violence and exploitation which is visited on trans bodies as we negotiate healthcare. Gaining access to hormone therapy is often lifesaving for trans women but, as I’ve learned, fraught with invasive exams, questionnaires, and a dehumanizing medicalization of gender and body. Kai Cheng captures this dynamic through her fantastical rendering without needing to explicitly say anything about trans bodies and medicalization.

The ability of fairy tales to speak to the complexity of human experience is why they’ve persisted as a favoured narrative structure for so long. Kai Cheng exploits the capacity of fairy tales throughout her work, presenting a range of transgender women who use magic and inhabit a landscape of spirits and violence. She mythologizes trans women throughout the book, including a character named “First Femme.” The “First Femme” is a murdered trans woman whose spirit inhabits the “street of miracles” where the trans women characters work and live in the “city of smokes and lights.” She is an origin story for all the trans women in the book, a goddess who directly responds to the prayers of the women and seeks vengeance on the cis men who bring violence to them.

The presentation of trans women in the book is one of Kai Cheng’s strongest narrative successes. They represent a wide range of races, gender presentations, and abilities. Social bonds and jealousies between trans women are the focus of the narrative, an uncommon distinction in the presentation of trans women in literature. The women support, compete with, and love each other in equal measure. At one point in the narrative, they unite to respond to the murder of one of their sisters and become a vigilante gang. The scene where a group of trans women have a brawl with a group of cis men in a park is one of the best representations of trans women I have ever read. We are not powerless social justice victims in Kai Cheng’s work, but ravaging warriors who break bones and shake the heavens with battle cries.

In part, Kai Cheng’s rendering of trans women is the grounding element of the overall narrative. I found myself constantly interpreting the fantastical elements of the story, debating whether the bee-sting story of the protagonist was a metaphor for gender dysphoria or childhood abuse. My constant translation of Kai Cheng’s imagery could be a distraction from the narrative at some points, but the human bonds between the trans women and the way they sought to affirm each other’s agency pulled me back into the story. Without the voices of the trans women, Fierce Femmes and Notorious Liars would lack much of its emotional power. 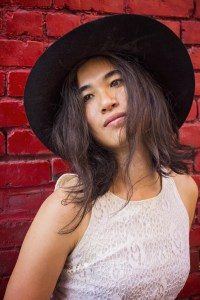 A couple of moments strike me as particularly beautiful and poignant. There is a dream sequence in the book where the protagonist imagines her body blending with a white cis man in a sexual and emotional embrace. The description of the two bodies combines violence and softness in a singular moment. I found it to be an insightful representation of the relationship between trans girls and cis men. The dynamics of the sexual/emotional relationship between trans girls and cis boys can be gentle but are still bound by the sexual violence that often follows our love. In another moment in the book, Kai Cheng describes an agreement between two trans women who are lovers. The agreement exposes the complexity of the bonds between trans women: how we can love, need, and hurt each other. It is rare to find a moment of affection in literature between trans women without anyone watching but us.

Reviewing Fierce Femmes and Notorious Liars is challenging, because the work is drawn from a fairy-tale tradition and steps through so many possible visions of the world. It breaks structurally into poetry as well as playwriting. The principle narrator is untrustworthy and often decides to change her story, giving multiple versions of the same event. There is a persistent wonder and disbelief throughout Kai Cheng’s world. It vibrates with a radiant intensity of colour, sound, and bodies.

If I had to say one thing about the significance of Fierce Femmes and Notorious Liars, it would be that Kai Cheng is writing a creation story for transgender women. She is imagining a transgender protagonist who is richly imbued with agency, a fierce anger, and a desperate desire to bring her body into being. The world of Fierce Femmes and Notorious Liars is a conscious creation of wonderment with trans women as heroes and legendary beings. The real world is never far away from Kai Cheng’s reality, but she holds it back with a lightness of being and an illusionary gloss of magic.

Perhaps this is a particular gift of being a trans woman in the real world. Often labelled as “traps” or inauthentic women, we learn to imagine and create ourselves as beautiful and powerful beings. Our femininity is always on display, judged and evaluated by cis folks at every moment. We navigate a constant series of questions in our daily life—Do we pass? Are we worthy? Will this boy/girl see me as the woman I am? One way to respond to the transphobic violence of the world is to be a woman who dreams of another life, one where we are valued, safe, and loved. For me, I read Kai Cheng’s Fierce Femmes and Notorious Liars as a profound exercise in imagining a better world for trans women while also reflecting the truth of our bodies as powerful, radiant, and whole: a rich and complex tale, entertaining and confusing in equal measure. Just like the fierce femmes who fill the story, Kai Cheng’s book is not easily categorized or consumed. Instead, the book burns in my mind. A shimmering oasis of insanity and beauty caught in a web of half-truths and insight, Fierce Femmes and Notorious Liars is one of the most distinctive books I’ve read in a very long time.