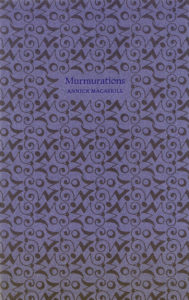 Annick MacAskill’s second poetry collection, Murmurations, explores what it means to live inside a body. Driven by hunger, thirst and love, MacAskill captures powerfully instinctual feelings of longing and release in poems that are intensely present and tuned into their surroundings with all five senses. Murmurations pushes the limits of comparison and convention to suggest an existence that, despite our technological complexity and our tendency to set ourselves apart from the natural world, is creaturely and embodied. For MacAskill, desire is “a chain / around my neck, pitching me forward.” Moving in rhythm with the natural world, lovers court like pair-bonding birds, disperse for seasons, only to return—pulled by migratory instincts—to love and connect again.

MacAskill explores the diverse settings of Murmurations with the posture of a naturalist, attempting to understand the world through immersed observation and developing a catalogue of language to capture and categorize experiences while still acknowledging what Don McKay calls “the enormous, unnameable wilderness beyond.” This naturalist’s lens is employed regardless of the nature of the setting. A room at the Comfort Inn, a small Halifax apartment, and a poetry reading in “Southwestern Ontario’s armpit” are given the same quality of attention as Banff National Park, the Great Lakes, and the Atlantic coast:

The McKay quote, and much of the book’s ethos, come from the opening epigraph, a long passage from Vis-à-vis: Field Notes on Poetry and Wilderness. Shorter passages from Anne Carson, Carol Ann Duffy, Audre Lorde, Louise Glück, and Sappho, begin each of the collection’s five sections. Like these poets, MacAskill explores nature, mythology, and love through a vital, queer lens.

Above all, Murmurations is a book of love poems. MacAskill shows us love in its different phases. The collection’s opening section opens with a line from Anne Carson’s Autobiography of Red, a queer novel-in-verse adaption of the mythological love story of Geryon and the Tenth Labor of Herakles. Like Carson, MacAskill writes about the thrilling early stages of love where shared time and space is a sanctuary and the only goal is developing a full sensory understanding of the beloved, the details of their body and their breath, through taste:

I’d like to know
the weight of you, hold it
between my teeth or under
my tongue, a secret
like the white ermine in the snow

I send out my fingers like pilgrims
to memorize you, your surface

MacAskill writes about love by writing about nature, specifically birds. The lovers in Murmurations are birdwatchers and the physical features, behaviour, and songs of the birds they witness together reflect, compound, and capture their physical and emotional states. MacAskill’s scientific knowledge of birds is impressive, but her descriptions of birds in action are a source of joy, surprising and precise, employing synaesthesia (“the wet call of the magpie”) and comparison (“And the geese rinse their necks, four bass clefs / dipped beneath the sky’s greyed mirror”) to capture their beauty.

As she writes about the world of nature and the world of humans, MacAskill rejects the dichotomization of the two, instead offering a vision of interconnection and mimicry where nature and humanity impact one another. Here, human communication is more about connection and attachment than about logic and narrative. “An anecdote / about your father’s hatchback Tercel / slipping from your soft upper lip” matters because it casts the lovers’ connection into the air, making it audible, not because of its content. Like birds, the lovers are “calling out to one another, tracking the sounds of their longing.” MacAskill not only connects our verbal utterances to the natural world, but also the sounds of machinery and written language. Foghorns are the “simulacra of whale songs,” phonetic transcriptions of bird songs are poetry, and words on a laptop screen are seeds, ready to be consumed and scattered by the reader. Her philosophical interrogation of language and communication builds upon the McKay epigraph which identifies “the abject thinness of language” while maintaining its necessity. In the collection’s closing poem MacAskill writes, “There are so many sounds in the world / we can’t recreate with our voices, so we trust / what the other means.” While it is impossible to perfectly capture the world in language, MacAskill suggests in Murmurations that seeing, touching, tasting, smelling, and listening to the world with a posture of openness and love is about as good as it gets. 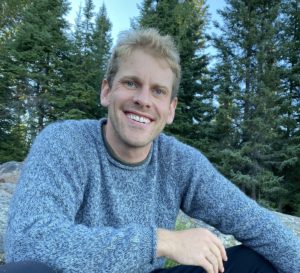 Noah Cain lives in Winnipeg and teaches high school English. His reviews and poetry have appeared in publications across North America including CV2, The Temz Review, and Teacher Voice Anthology. Find him online @caintbay.