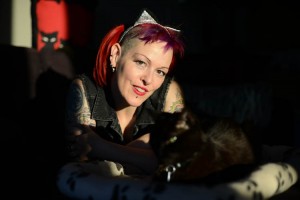 “GB Jones—Toronto-based artist, filmmaker, musician and ‘zine editor—is probably best known for her pencil drawings, many of which satirize Tom of Finland’s work with a sexy lesbo twist. Jones’ drawings depict the macho-dyke ghosts of queer punk fantasy—girl gang potential realized, complete with motorcycles, tight T-shirts, and shaved heads. They bring to life a previously unrealized urban tribe of ass-kicking, lust-driven women: rebels and degenerates and very bad girls. When I first encountered her work, I was smitten. More than that, it served as an awakening. Punk chicks could exist autonomously. We only had to steal some dude’s motorbike, complete with girlfriend and stash. We only had to choose to ride off into the sunset without him.

“GB Jones and Bruce LaBruce co-edited several issues of JDs (Juvenile Delinquents) as early as 1985. They could be bought or swapped at punk shows, or sent for in the mail. Unthinkable, by today’s online social networking standards, but that was the cultural context. I had my own hand-drawn mini-comic, a missive I projected into the void, imagining the return: a queer kid’s hopeful boomerang. Beloved by queer punks who could get their hands on it, JDs lead to the manifesto Jones and LaBruce co-wrote for Maximum Rocknroll in the late 1980s. In Kingsboro Press Issue 4 Jones says, ‘We were intent on creating a new subculture, inclusive of other pre-existing subcultures, but critical of them at the same time. We wanted to really bug the mainstream gay and lesbians while at the same time upsetting the punks as well, so we started the Queercore movement.’

“A book of Jones’ artwork edited by Steve LaFreniere in 1996, although available in the US and Europe at the time, was seized at the border and, ridiculously, ‘banned in Canada.’ Nowadays, some of her work can be appreciated online. If you have any original ‘zines in your possession, consider yourself a lucky punk!”