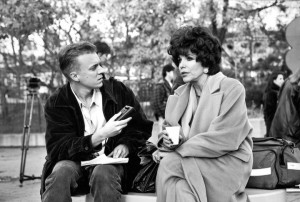 “I have thoroughly enjoyed Chloé Griffin’s new book, Edgewise: A Picture of Cookie Mueller, a fantastic, exhaustively-researched book about the work and life of the late great “child of suburban 1950s Maryland,” who John Waters freaks (and I count myself among them) will recognize as part of the director’s troupe of regulars—she’s especially hilarious in Female Trouble playing one of Divine’s partners in crime. The book is full of love and admiration for Mueller (as it should be), and I learned a lot about her life, including her brave fight against AIDS, which would ultimately take her life.

“Another title I’m simply blown away by is Gender Failure, co-written by the dynamic duo of Ivan E. Coyote and Rae Spoon. It’s a truly poignant series of autobiographical stories and reflections on our collective gender hang-ups. Beautifully written, poignant, and touching.

“Finally, I’m once again reading Truman Capote’s In Cold Blood — I was drawn to the book because of the Luka Magnotta trial, currently under way in Montreal.”

Matthew Hays is the author of the Lambda Award-winning The View from Here: Conversations with Gay and Lesbian Filmmakers. He edits the Queer Film Classics series with Tom Waugh. Current writing projects include a book about FUBAR and Truth Be Told, a collection of interviews with documentary filmmakers.