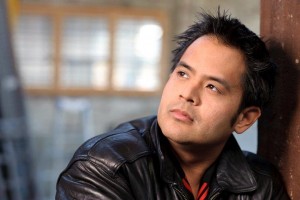 “I’d like to talk about Thomas Mann’s Death in Venice (1912), a novella that continues to haunt and inform me almost twenty years since I first read it. For those unfamiliar with it, here’s a brief synopsis. The main character, Aschenbach, is an aging, accomplished man of letters sojourning in Venice, as many uptight Brits and Germans looking to (re)activate their sensoria have been known to do. While supping he spots Tadzio, a fourteen-year-old blond Polish boy whose Greek-like beauty astounds Aschenbach to his core. He spends the rest of the trip following the boy, who remains, ostensibly, completely unaware of his presence. All the while a cholera epidemic sweeps the city, and the novella ends with Aschenbach, age-reversing make-up running down his cheeks, dying on the beach whilst gazing at his beloved. I adore Death in Venice not because it is about repressed sexuality, or unrequited love, or Greek-style man-boy love, although superficially it is certainly about all these things. I adore it because it is, first and foremost, about art–specifically, the life lived in service to art, and, even more specifically, the closeness to which such a life is tied to gay male identity. ‘Even on a personal level,’ Mann writes, ‘art is a form of heightened living. It gives greater pleasures, it consumes faster. It stamps the features of its servants with the signs of imaginary and spiritual adventures, and it produces, even in the most cloister-like atmosphere, a certain fastidiousness, an over-refinement, an exhaustion and curiosity of the nerves.’ Nowhere is the dilemma of the besotted aesthete–who is very often gay–more cogently articulated than in this book: his monk-like commitment to (mostly) invisible ideals; the overwhelming awe, bordering on horror, he feels the moment these ideals are actualized; and the fragility of high art in the face of diseased, Dionysian nature. Somehow, over fifty years before gay liberation and over seventy years before AIDS, the closeted, bisexual Mann was able to prophesy how the profound contradictions in gay male culture would one day come to a head. We may be living in a post-gay, post-AIDS world; but the gay male aesthete lives on, still a minority, still inhabiting rarefied realms, simultaneously contemptuous of, and aroused by, the exquisite mundaneness beneath him.”

C.E. Gatchalian is a Vancouver-based writer and the Artistic Producer of the frank theatre company. His latest play, Falling In Time (Scirocco Drama, 2012), was a finalist for the Lambda Literary Award. He was the recipient of the 2013 Dayne Ogilvie Prize, awarded annually by The Writers’ Trust of Canada to an emerging LGBT author.