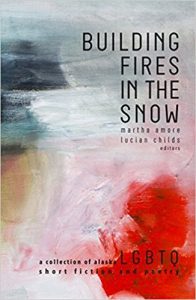 Building Fires in the Snow took me for a jaunt down memory lane. When I was a university student, I spent a couple of summers working in the Yukon. I hitchhiked the Alaska Highway with a friend, arriving in Whitehorse seven days after we first stuck out our thumbs in the Fraser Valley outside Vancouver. Along the way, especially north of Prince George, we met with a host of characters—dreamers, charlatans, religious zealots, and seriously troubled souls—many passing through the Yukon en route to Alaska to work in the canneries or simply escaping life in the south. Or Outside, as Alaskans say.

Reading Building Fires in the Snow—an anthology of writing by LGBTQ Alaskans—was like coming face to face with some of those northerners again, folks eager to ease themselves free of the confines of their lives, to renew themselves or begin again. It’s a collection heavy on themes of self-exploration, solitude, communing with nature, back-to-the-land spirituality. There are compelling pieces exploring Alaska’s recent social history, capturing the kaleidoscopic 1970s, second-wave feminism, alternative communities, resource exploitation. It’s an anthology rich in character, and the various personae who step forward from these poems and stories meet the reader like vivid cinema characters. They’re human and they’re familiar.

Some of the most powerful stories explore the recent past. In Mei Mei Evans’s story “Going Too Far,” an underage girl named Tierney hitchhikes to Alaska with a gay man named Robert in the turbulent 1970s. Through a group of free-living strippers in a small Alaska town, she begins to uncover the tender truths that will propel her into the future. In Lucian Childs’s “The Go-Between,” a man looks back on hedonistic, booming gay life in early 1980s Anchorage from the dreary comfort of suburban midlife.

Some of the most haunting work in the collection is Jerah Chadwick’s poems, which simmer with an eroticism rooted partly in the claustrophobic, interior world of a remote Alaska cabin. The cabin is both home—an anchor—and a cage.

We resist each other with words, or wordlessly

avert our eyes when tenderness

is too much to bear the wanting

heart to be only muscle. As if

this were a question of strength,

the answer of your eyes, and language,

one wing flying into itself, some bird we drive up

that feigns to draw us away from its nest.

Elsewhere, writers explore the vagaries of suburban life. The majority of the works are focused on Anchorage, the state’s largest city, where nearly 40 per cent of Alaska’s population lives. We meet characters in gaudy back-alley bars and upscale restaurants. We meet lovers, partners, spouses, and children. We read about the tedium of work and the messiness of romantic break-ups.

One of the threads running through the collection is the overtly confessional tone. In fact, many of the short stories have the feel of creative non-fiction pieces, thinly veiled memoir, if only because of the heavy reliance on the first-person narrator and the absence of insight into other characters in the stories, their interior worlds.

Others run toward the playfully, joyfully experimental, like Dawnell Smith’s “What Would Derby Do?,” a series of letters to a roller derby advice columnist. MC Moghani’s short pieces “Creep” and “Shhhh-Be-Quiet,” told through sassy, straight-shooting language, explore the dangers of living as a trans woman in the North.

Themes of wilderness and environmental destruction run through the work. There’s a sense of the fragility of the land, and the devastating impacts of the extraction industries loom large. Taken as a whole, the anthology offers a roadmap of Alaska’s recent social history, following the boom and bust cycle of the oil industry, the growth and transformation of Anchorage, the rise of LGBTQ culture from seedy backrooms bars to same-sex couples openly leading fabulously suburban lives, sometimes with children in tow. There’s a churning transience to the collection, a sense that Alaska occupies an imaginary, a space of dreams and possibility, of hope.

Greater diversity would strengthen a future anthology. While this anthology is about evenly split between female- and male-identified writers, as the editors readily admit in the introduction, there are few stories here of Native Alaskans. Most of the stories skew towards Caucasian, middle-class lives. There are also few pieces from trans writers, although those included are compelling.

Perhaps one of the oddest oversights is the generational skew of the collection. There are few youth voices, and even the younger lives explored feel placed in time, coming of age in the seventies and eighties. It’s not the place to get a read on what’s happening among young queer people in the state today, or what the temperature is for these queer kids in the land of Sarah Palin.

But that’s fine. I enjoyed the read, savouring each poem and story. Overall, this Lambda finalist is an important and critical reflection on the importance of understanding LGBTQ lives and stories from a highly local perspective. Modern media can blur the realities of what’s happening on the ground, imagining that what happens in Toronto or San Francisco or Vancouver is what’s happening in smaller places. Building Fires in the Snow is a testament to the fact that LGBTQ struggles are in conversation with global currents of change and resistance, but experienced always in the local, in the everyday. This collection delivers plenty of both.

Trevor Corkum grew up on the East Coast and now divides his time between Toronto and Prince Edward Island. He hosts the author interview series The Chat on 49thShelf. His fiction, essays, journalism, and reviews appear regularly in periodicals across the country. The Electric Boy, his debut novel, is forthcoming with Doubleday Canada.