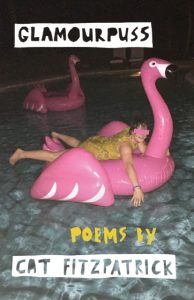 When I teach poetry to my first-year students, they often don’t know what to say. As a genre, poetry seems to be too old, too stiff and formal, or too cavalier and obscene—depending on what student I poll that day. The only other genre that seems as contentious is trans writing. So for me, it’s highly fitting that poet Cat Fitzpatrick’s first full-length collection Glamourpuss is all of these ideas about poetry at once. Fitzpatrick takes the formal style of sonnets and writes thirteen of them “twelve years too late” about growing up trans, she writes an ode to breast implants, and she pens a long chorus about the English countryside and capital-N Nature before declaring, “I am a fucking tranny standing in / A field, what the fuck?”

I’m aware I’ve already made a fatal error: I’ve conflated the author with the speaker in the last poem. While I flit between referring to the speaker/narrator of the poems and Cat Fitzpatrick as an author in this review as a way to keep critical distance, I also blur the line in other places. I do this deliberately, because to remove Fitzpatrick from her work is, in my opinion, to perform the same type of dissecting of the self that doctors, therapists, and critics do when they examine transgender bodies and their writing. My point, when I blur Fitzpatrick and the speaker of these poems, isn’t to misinterpret intention; it’s to give these poems a distinctly trans perspective, one that is informed through Fitzpatrick’s eyes. Basically, to remove the personal, biographic reading from these poems and pretend that surgery is a metaphor is to commit the same error that Casey Plett documents cis authors doing in her “Rise of the Gender Novel” in The Walrus: by trying to remove transness from the body, they’ve used mythology as a universalizing tool, and therefore turned trans people’s realities into fantasy. Though Fitzpatrick uses literary allusions, capital-N Nature, and myth quite frequently in her work, she does this not so her work is palatable to a wider (cis) audience but to make her work distinctly trans.

As a book, Glamourpuss is a love song to the exact formalism that traps poetry and makes my first-year students afraid to talk about it, while at the same time using this formalism in style to act as a shadow to the institutional strictness of gender transition. Surgery is mentioned consistently, but not in the way typical of most transgender memoirs. The poetic body evoked isn’t a dream of cisness, but something distinct. Fitzpatrick’s bodily landscape is made up of “little scars” and a “Thailand vagina I know [is] shallow.” There’s no shying away from difference: there’s exaltation in that difference. The scene near the beginning of “California Encomia” where several trans women go naked in a car because “It’s safe. For once!”—that safety is a wonderful relief that is only doubled when the narrator encourages all the “tall girls” to “expose yourself in cars!” Similarly, after the musings on a camping trip in “HEY NATURE GIRL!” (a trip the narrator spends wet and uncomfortable), Fitzpatrick writes that “nature isn’t nice / Although we sometimes make it look that way.” The feelings towards nature, poetry, and the reality of medical transition aren’t idealized or valorized, but taken as individual moments of fleeting beauty and rendered in poetic form for appreciation.

Glamourpuss darts between these ideas of artificiality and authenticity, while never managing to take a side on either. Fitzpatrick also darts between the highly mythic contents of poetry in her “Seven Women I’m Not” and very basic quotidian experience in “How to Be Stealth.” Eve from the Bible is held in as much regard as Nick at her telemarketing job; both can be mythic and both can be boring. Even the poems that didn’t grab me as much as others, such as “Grand Hotel,” I still appreciated stylistically and thematically. Fitzpatrick knows what she’s doing with her poems, and I enjoy the construction as much as I do the content and images she evokes. Her work also manages to transcend the page. In “All the Trans Girls,” I can hear the cadence of the possible delivery. Fitzpatrick’s poetry, especially the last poem, “Glamourpuss, Repent!,” is something that demands to be read out loud. 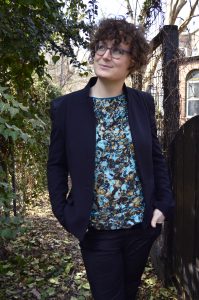 “Glamourpuss, Repent!” stands out on its own due to its kaleidoscopic listing of clothing, academic accomplishments, and musing on identity itself. I read the repeated lines of “repent” as another way in which Fitzpatrick takes the authenticity of the trans narrative so steeped in confession and twists it into something artificial and fun, even changing the refrain to “Glamourpuss, come back” near the end. The listing of clothing becomes more ridiculous and the musings a little more on the nose, until the final stanza reveals:

Glamour isn’t such a power,

When you learn your charms are lies

do you cast them anyhow?

Glamourpuss takes all the best and worst assumptions, all the potential misreadings of poetry and transgender experiences, and answers “yes” to her question by rendering these experiences into a sampling of random everyday events, life-changing moments, frilly mini-skirts, and a sunset. Fitzpatrick’s writing invites you into her world, dazzles you, and also makes you realize that the world can be painted with these colours and experiences if you want them. Even if your charms are lies, it can still be fun to cast those spells.

Evelyn Deshane has appeared in Bitch magazine, the Rusty Toque, and Briarpatch magazine. Their poetry chapbook, Mythology, was released in 2015 with the Steel Chisel. Evelyn (pronounced Eve-a-lyn) received an MA from Trent University and is currently studying for a PhD at Waterloo University. Visit them at evedeshane.wordpress.com.