I am not familiar with that pull. I would not know what to avoid,
so I pick my way across, nearest the shore, my soles sucked down,

thinking of opaque glass and broken shells. Underneath, I have been told,
a murk of ancient vegetation, which will eat me, slowly and without curiosity.

That most human thing, to attribute will. To imagine violent intention
in elemental action. I stoop for a shell. Cockles and mussels. My mother,

where they were when the water came. Alive, alive-o. There is a memorial
further along. I have seen the last shrimping-boat, docked. It is yellow.

I have come here to be told things. The sand is too silted now for shrimp.
The sand has been imported from Romania to address

a sand shortage. The Romanians were also imported, then sent back.
The sand remains, becomes native to this place. I do not know what

belonging is. Habitation. Habit of being. Habit. I am hopeful
for the habit of being, to be sand from anywhere. 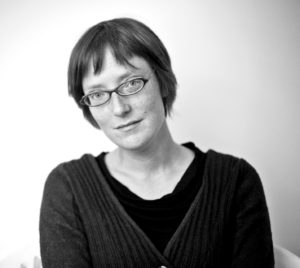 Kate Cayley has published two short story collections and two collections of poetry, and written a number of plays, which have been performed in Canada, the US and the UK. She has won the Trillium Book Award, an O. Henry Prize, and the Mitchell Prize for Poetry.