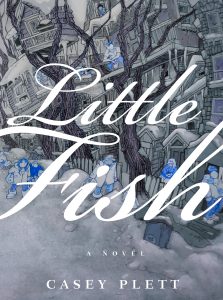 There are several moments in Little Fish by Casey Plett where the protagonist, Wendy, tells the readers that she always envisioned herself as more of a woman when she thought of her body from the back. This is a really queer thing to say–as in the original meaning of the word queer, which is bent or turned away. This turn away from the self, from the reader, community, family, and history is the entire dilemma of Little Fish.

The story opens with the death of Wendy’s Oma (grandmother) while she and her friends are at a bar. Her Oma’s death, followed by a strange call during her funeral about her Opa’s (grandfather’s) past life, marks this as a ghost story, but these events also–to quote from Hamlet–throw the “time out of joint.” During this first chapter, Wendy and her friends discuss how trans people age differently due to a new regime of hormones, thereby reconfiguring the notion of time-as-biological. They also reconfigure time-as-autobiography by counting their age as when they first came out as trans, rather than birth. Though we are aware that Wendy is an adult through most of the book (and the back blurb tells us she’s thirty years old), we don’t actually get her age on the page until near the end, whereas we get her transition age of eight years several times. Wendy’s life has also come to a stand-still, but then seems to go backwards when she starts to look into the mysterious phone call from the funeral and her Opa’s former life. Time is further distorted when when Wendy’s job at a gift shop ends and she realizes she must go back to sex work in order to survive. Her return to sex work, like re-investigating her Opa’s life in a Mennonite community, means she’s constantly going in circles. She is always looking backwards while taking steps forward. 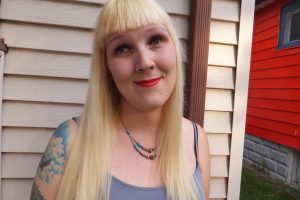 This is entirely the point. Not only does Plett reconfigure so much of the typical transgender narrative, which after reading A Safe Girl to Love, I was expecting her to do, she’s also positing something interesting about trans communities and progress. It’s not just Wendy’s queer sense of time we see; we also have her group of trans friends who constantly crowd the narrative. These women are a delight, but also a cacophony of chatter, noise, colour, and motion. The Halloween scene with every single one of them in dress-up mode is dizzying and confusing to follow, but an utter joy to read. Their visibility matters so much because, as one of them remarks, trans people age differently than cis people because they often die before their time. When one of these trans women does die, Wendy refuses to let her become invisible, constantly remarking on her lack of presence until the very end.

It can be easy to view Wendy as Wendy from Peter Pan, constantly cajoling and trying to make her group of lost girls grow up and move out of their stasis, but that is not the case. Wendy turns her back on progress, quite literally, and instead works on defining a new path that is not the teleological surgical narrative as dictated by doctors. Even when we get glimpses of Wendy’s surgery story, it is at the end of the novel, and told more to help us understand her father. Moreover, though she goes to Montreal for her surgery, she always comes back home to Manitoba. She, once again, looks back in order to move on.

Manitoba represents time’s out-of-joint quality the most, since it is the Mennonite community in Manitoba which (possibly) silenced her Opa’s queerness. Wendy spends the bulk of the narrative moving back and forth from country to city as she visits a Mennonite woman named Anna who helps to fill in the blanks of her Opa’s life, like the period in the 1980s where he simply disappears from photographs. Anna is the first person who knocked the time out of joint by conjuring a ghost, but Wendy is already well familiar with this strange sense of time. She thrives in it. Even when Anna provides answers that are less than revelatory, Wendy is able to move on. She can simply go back to the start all over again.

It can be easy to see the Mennonite community–and even trans time in this book–as perpetual stasis. As dizzying or dreadful. But Plett knows that is not the case, that there is a kind of relief in this perpetual return. She tells us about Wendy’s view of her back, but then ends the book with Wendy moving forward and liking where she is going. And while she speaks about the oppression of the Mennonite community, she does not paint them as the enemy. She resists that narrative as much as she resists the typical surgical one, and I see this in a line where Plett describes a Mennonite “woman with a kerchief [who] sold perogies and gravy out of her mini-van beside the Walmart.” This is such a simple line, but it is so moving to me because I live in a city shared by a Mennonite community. I see things like this all the time, and after reading Little Fish, I know it’s not stasis. Or dizzying or dreadful. It’s a deliberate choice, like Wendy turning her back on herself, and defining her community elsewhere.

Little Fish gave me exactly what I already expected as a fan of Casey Plett, but it also delivered more. The writing is crisp, clear, and innovative. I can’t wait to see what she does next, and what looking back gets us.