I never went to the High Line or sucked transgender clit or dick. I never asked for three

I never asked a stranger to pull over his car so I could take a hot dump in the woods. I

them in that forest and go home dirty-commando, I don’t know that I could.

I never went to sex parties; I never broke my finger getting penetrated on a broken table

I never ran a marathon in Ireland because though my limbs always survive, they are

petrified and are not all that able. I never got a Hot Richard from Betty Grable

I never stole the concept of a “Hot Richard” from 30 Rock. I never flipped

over a lecher-professor’s table and signed it with my friends. I never say “The End”

I never experience rage when I realize that I’ve merely rhymed a word with itself.

I never bent over to tie my shoe and farted. I’ve never left a kind person broken-hearted

in Halifax or given flack to those who hoard bric-a-brac while subletting my apartment.

I never know best. I usually do worse than you’d expect. I never crowed at anyone to

come out of the closet. I never laughed at their mothers for being rich snotty fuckers

with an exceedingly low tolerance for anything worthwhile. I never let a friend extract

all my back’s blackheads. I never blueballed anybody or believed in that concept or

fat; I’ve never worried the back of my neck looks like a pack of hot dogs.

do but I never let that stop me. I didn’t laugh when you told me you peed in a yogurt cup

when my roomie was in the shower. I didn’t go see all the Twilight movies by myself;

I’m not the Captain of Team Jacob. I never tried on Mom’s special occasion make-up.

I never find pus charming. I never take too many headache pills. I still have never, though

I likely will, eat more than my fill at a sushi buffet and barf a nori yarn-ball later that day.

I never play mental Tetris. I never type out what you’re saying with my fingertips against

my jeans. I’ve never been lean or mean, a Bacardi Breezer-guzzler, or a Prayer Machine.

I never use my Pay-Per-View service to order Karaoke and sing to myself all night. I

didn’t order Girls Night Out, Pure Shania, Madonna Classics, or anything of the sort.

I never read a poem about someone who was in the audience. Psych!

I never biked to a high school hockey game. I never dreamt of gay jocks self-destructing

on ice. I’d never hold up crude posters about the other team. That would not be nice.

I have never fucked people who want to be straight. What would be the point? I was

never anointed by holy oils by holy men in holy places through the haze of a holy joint.

Father Dan in my dreams.

I never laughed when I met my mom’s priest with his white shorts, white belt, and

handsome companion-man. I never was a heretic bent over in hysterics when

Mom said the priest was on his way to a sabbatical in San Fran. I never brainstormed

a eulogy for someone who hadn’t died. I watched The Muppets but no I did not cry.

when I say that we never tried.

I never didn’t go to the High Line. I never chose not to take a Percocet with a large bag of

Cheezies. I never failed to not be easy. I’ve never binged. I’ve never not purged. I didn’t

not slice my finger off, so I never did not go to Emerg. I’ve never hated the word “perv”

and I never missed a pedestrian by one small swerve. I never didn’t secretly think that

you have a personality disorder. I never didn’t judge your drinking. I’ve never had

a cavity search at the border. I’ve never regretted a hasty Subway order and I’ve

never eaten for three. I’ve never not refused to make do with too few black olives

on a foot-long and I’ve never expected anything or anyone to be or to feel “free.”

I never am unannoyed by the imperative to be happy, by the belief in utter

truth, by the smell of my colostomy, or by the lie that I have a colostomy.

I’ve never prevented anyone from not being close to me, which means I never

stop you from seeing too much of what I don’t want you to not want to see.

single letter of LGBT. I never played pool at the dyke bar. I could never find a cue.

I never jerked off on a full bus with a Cosmo mag.

I never promised that every word would be true.

I never rely on my inability not to lie when I stand on the High Line. I never pen lines

without a doubt as to how they’ll turn out or if someone will recite one when I die.

I never thought you needed to know “who I am”

only that I never, ever, lie, High Line. 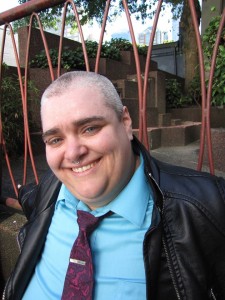 Lucas Crawford is a poet and scholar who is the current R.W.W. Junior Chair at SFU and the Critic-In-Residence of CWILA (Canadian Women in the Literary Arts). Lucas’s first book of poems, Sideshow Concessions, came out with Invisible Publishing in 2015 after winning the Robert Kroetsch Award for Innovative Poetry, and Lucas’s scholarly book, Transgender Architectonics, came out in December 2015 with Ashgate.