In memoir, the narrator often speaks from a present place of knowing about a past event. In your creative non-fiction piece “Spare Change,” however, the voice is in character—the character being the person you were at that time. How do you decide on voice when writing non-fiction? What are some things you consider when writing and revising your non-fiction, in terms of point of view? (for example, did you try other voices in earlier versions of “Spare Change”?)

I will often choose to work in present tense when I’m writing about a time in my life when I was immature or ignorant. For example, when writing from the perspective of a child—or, in the case of “Spare Change,” a young adult—there is a lot of information that the protagonist (for lack of a better word) doesn’t have in the moment. Ignorance influenced my actions at the time when “Spare Change” took place. I didn’t understand the dangers of heroin, I didn’t think about the consequences of sex, I didn’t know a lot of things. To pull a reader into this story, I felt like they had to follow along in real time, to watch me making choices with the information (or lack thereof) that I had at the time. If I had written this in a more traditional way, I thought the reader might ask, “Why were you so dumb?” Or worse, “Why should I care that you made a bunch of bad decisions?” By getting inside eighteen-year-old Sierra and letting her lead the memoir from the inside, I hoped to prevent these questions. Eighteen-year-old Sierra thought she was a badass, and to some degree she was, but she was also afraid, overconfident, pompous, and just kinda dumb, like most eighteen-year-olds. So I tried to capture that in her/my voice.

When I have the tense and the voice down, and the whole story is on paper, then I can go back and revise. That’s when I play with structure and scene (which is something I did with the black-out scene and the flash forward about Dean). Ultimately, I believe a writer will just know when they have found their voice for a piece—it won’t feel right until the story has become what it was meant to be.

Read Sierra Skye Gemma’s “Spare Change” to see how she uses voice and tense to tell her story.

Write for ten minutes about something that happened to you when you were a teenager, and write it in the past tense. Next, rewrite that scene in the present tense, this time putting yourself in character—the character being who you were at that time. What is the effect? 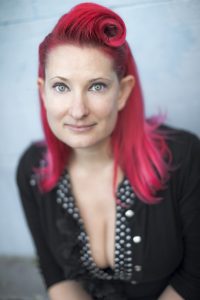 Sierra Skye Gemma is a writer and journalist based in Vancouver, BC. She won the 2015 National Newspaper Award for Long Feature and the 2012 National Magazine Award for Best New Magazine Writer. Sierra’s non-fiction has been published in The Globe and Mail, The Vancouver Sun, The New Quarterly, Plenitude, and elsewhere. You can find her online at sierraskyegemma.com and on Twitter @sierragemma.