This documentary should be shown in every school as a prerequisite for becoming an adult. This statement may be showing my hand early in a review, but it’s not hyperbole. From the moment the film starts, depicting recent protests against regressive policies that limit women’s access to reproductive rights in Texas, She’s Beautiful When She’s Angry is an empowering, step-by-step journey through the birth of the modern women’s rights movement. Spoiler alert: you, like me, will probably end up feeling really angry for all the right reasons. 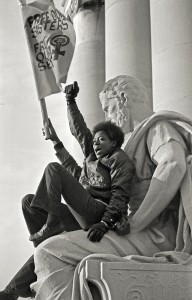 She’s Beautiful When She’s Angry covers the period from 1966 to 1971, when the National Organization for Women was created, catalyzed by the peace and civil rights movements; NOW in turn spawned a number of more radical, contentious, creative, and utopian feminist organizations. At the beginning—and in a really wonderful way—She’s Beautiful is overwhelming if only for the sheer quantities of information, events, and voices it jumps directly into. After the first hour, the barrage of faces, different activists and advocates, begins to coalesce into a play-by-play of the early feminist movement, exploring different aspects and events, the good, the bad, and the ugly. The documentary, at once a love letter and a critical examination, artfully dissects issues of class, race, sexuality, gender, art, politics, and institution, flipping between archival footage, images, and writings of many of the women who formed the foundation of feminism.

It’s difficult to criticize She’s Beautiful When She’s Angry without rehashing criticisms of the early feminist movement from a modern feminist perspective. The voices heard are overwhelmingly white women, and the film reflects on this issue from a historical standpoint, but even the racial issues it does address are explored briefly and don’t do that part of the struggle justice. Given the modern struggle for the inclusion of trans people in the feminist movement (thank you trans-exclusionary radical feminists), I would have loved to get the perspective of a transgender feminist—I can’t believe for a second there wasn’t at least one trans-identified person involved in the early feminist movement. Lesbians and queer women get a little bit more screen time, but however briefly some of the voices appear, the film returns to the necessity of intersectional feminism time and time again.

There came an exciting moment, maybe a half-hour or so in, when I realized something extraordinary about the documentary. Every single voice was that of a woman—the only times men’s voices are heard are in archival footage. This was a powerful realization, because how often do we see any film, documentary or otherwise, that features only women?

This film should be shown in every school, because on top of celebrating the amazing women who changed the world, and educating those of us ignorant of their accomplishments, this documentary serves as a cautionary tale. She’s Beautiful When She’s Angry returns, in the end, to the angering fact that there are those who would roll back the rights extended and disempower women—which hurts everyone. The burden lies on feminists, who must always stand vigilant, ready to fight back.

She’s Beautiful When She’s Angry played May 28, 2015, at Inside Out Film Festival in Toronto.