Swam in a lake of it, got typically fucked
Took stock of bathing coupons: half a chunk

of trophy on display, the marble auction, from where the guests
come in. On the right side the cradle of her thigh

a mini world limned in that slit
rounded, undraped, but fuller in the rocks.

I am worried this will reflect the conditions of its production, e.g.
nobody told her to grab her tits in line.

Fake-weepy Tony Curtis: “I can never have children”: swell motorboat
gunning for Florida. Nobody’s really a transsexual, you play it at CVS.

They don’t know what one’s like, or where she mislaid
her infinitely collapsible appetite, when the drapery slips.

The specials: Ovid, medicamina, crawling transhistorically
out of the lake and trying not to moon the gods. Does your cunt

Drip protrudingly. Does it talk back. Do your inguinal girls look
Like alien eggs or are they fangs cradled over what’s

Closed up like on a statue. It’s the pharmakon
all over, or a translational racket scheme.

Toss her a towel? She is over the pharmarkon counter.

Wouldn’t she kill for that, uh, cardigan. Neither conspiracy nor
Accident exactly, the belly is absent except for radical mpreg, and no one

Cares if she squirts now. Nobody planned it. Anyone
could fall in the lake.

When we set out to clock our shit, when we sluiced smacked
our hankies etc.,

ran out of figures for a hailing mean as teeth
no less boring or uncommon, what else?

Cover what you’ve got: the guests are here,
or coming, and everyone wants a bath. 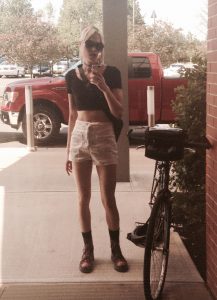 Kay Gabriel is a PhD student in classics at Princeton University and a co-editor of Vetch: A Journal of Trans Poetry and Poetics. Her writing has appeared, or will soon, in TINGE, Matrix, Harlot, EOAGH, Transgender Studies Quarterly, and elsewhere. She collaborated with David W. Pritchard on the poetry chapbook Impropria Persona, forthcoming from Damask Press.