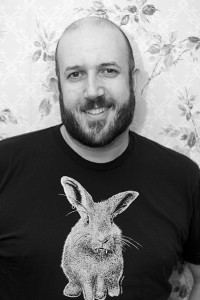 “Writers tend to feel isolated and misunderstood at the best of times, and that seems especially true when you’re gay or a still-in-the-closet-poet-and-former-competitive-junior-curler-from-the-suburbs like I was when the writer Lynn Crosby, during a boozy reading in Victoria that included us singing a karaoke duet of Helen Reddy’s ‘I am Woman,’ recommended that I read the work of California’s David Trinidad.

“A couple of weeks later I went to Little Sister’s bookstore in Vancouver, where I purchased his poetry collection, Hand Over Heart. I remember being blown away by Trinidad’s unapologetic use of the popular AND gay desire. ‘You can do that?’ I thought to myself as he crafted lists of girl groups into poems such as ‘Meet the Supremes’ and the collection’s title poem. He gave me permission to let my writing embrace the small disasters and intimate joys found in both my real and popular-culture inspired lives, as well as in the intersections where those lives collided.

“Crosby ended up co-editing the collection Plush, an anthology of contemporary gay poetry, which included Trinidad’s work along with Canadian scribes such as R.M. Vaughan and Sky Gilbert. That was also a pivotal collection for me, and one of the main reasons I approached John Barton about the possibility of working on the project that would eventually become Seminal: The Anthology of Canada’s Gay Male Poets.”

Born in Halifax and raised in Langley, BC, Billeh Nickerson is the author of four poetry collections—The Asthmatic Glassblower; McPoems; Impact: The Titanic Poems; and Artificial Cherry— and the humour collection Let Me Kiss It Better. He is also co-editor of Seminal: The Anthology of Canada’s Gay Male Poets, and past writer-in-residence at both Queen’s University in Kingston, Ontario and Berton House in Dawson City, Yukon. He is a former silver medalist at the Canadian Gay Curling Championships and the current Chair of the Creative Writing department at Kwantlen Polytechnic University. He lives in Vancouver.