All the years gone wrong, in a blindfold
pin-in-the-map sort of place. No day trip or retreat,
more like a sun-drenched fire escape.

First an Italian ice cream parlour, let time
circle a while, peer down pipe-smoke boulevards,
let the seafronts blend into one another.

The lives un-lived, the doors that close;
the one seemingly I want is wedged open …
Out the window slide the zimmers;

soon I follow. A pilgrimage to metal birds
cast by a sky of clouds, adzed and surreal.
I long for their wings; my shoulder blades tickle.

Who knows what’s left to bargain for
as I ghostwalk the Winter Garden, Assyrian Tower,
past faded pop glamour, then pause:

I’ve dropped nothing, so why the psychedelia?
Like mosques once seen in place of factories
a seascape turns to a Lowry abstract;

a crisp packet promenade, spectral charabancs,
as shades placate on carborundum facades …
This must be, for some, ataraxia —

though the crisis comes for this alter ego,
at the nadir, when I swear mother’s footprints
are somewhere near the Midland. Big decisions

rehearsed in the badlands, plain sight of Heysham,
thoughts of the nuclear. This, the unmarried
life. This is leisure and slow retirement. 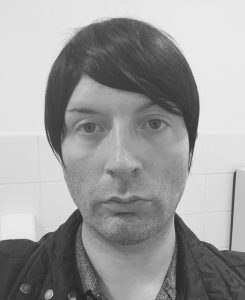 Patri Wright was born in Manchester in 1979. He completed a PhD in English at the University of Manchester in 2007, supervised by Terry Eagleton. Wright has since graduated with an MA (Distinction) in creative writing from the same university. He has been shortlisted for the Bridport Prize, and his poems have appeared in Agenda, Poetry Quarterly, Iota, Brittle Star, London Magazine, Ink, Sweat and Tears, and various anthologies. Poems from his pamphlet Nullaby are praised for their “breathtaking insight” and demonstrate “sophisticated writing with impressive risk-taking and aplomb” (Vona Groarke). He teaches creative writing at The Open University.